Hillary Clinton ordered the start of RussiaGate on July 26, 2016.

A newly declassified document reveals that the Russia Gate hoax and scandal that engulfed the first three years of President Donald Trump’s first term in office were always fictitious, and likely started at the direct orders of failed presidential candidate Hillary Clinton.

The document explains that Clinton’s foreign policy experts hatched the plot to vilify President Trump by connecting him to Russian President Vladimir Putin, and Clinton approved the plan on July 26, 2016. The document also reveals that disgraced FBI Director James Comey and Deputy Assistant Director of Counterintelligence Peter Strzok were both aware of the plot.

The news comes from John Ratcliffe, the United States’ Director of National Intelligence under the Trump administration, and is addressed to Sen. Lindsey Graham (R-SC) in his role as Chairman of the Senate Committee on the Judiciary. 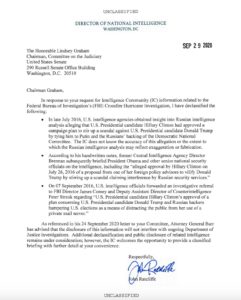 “In late July 2016, U.S. intelligence agencies obtained insight into Russian intelligence analysis that U.S. Presidential candidate Hillary Clinton had approved a campaign plan to stir up a scandal against U.S. Presidential candidate Donald Trump,” the document explains, “by tying him to Putin and the Russians’ hacking of the Democratic National Committee”

The document then explains that “former Central Intelligence Agency Director Brennan subsequently briefed President Obama and other senior national security officials on the intelligence,” including “‘alleged approval by Hillary Clinton on July 26, 2016 of a proposal from one of her foreign policy advisors to villify Donald Trump by stirring up” the Russia scandal.

It is also revealed that “intelligence officials forwarded an investigative referral to FBI Director James Comey and Deputy Assistant Director of Counterintelligence Peter Strzok” regarding Clinton’s plot to falsely connect President Trump to the Russians.

BREAKING: On July 26, 2016, U.S. intel authorities learned that Russian intel knew of Hillary Clinton’s plans to cook up a scandal alleging that Trump was working with Russia. Obama was personally briefed on Russia’s knowledge of Clinton’s plans. pic.twitter.com/jOeRyXIlYA