Bannon Questions Why Trump Waited So Long to Oppose McConnell

Bannon Questions Why Trump Waited So Long to Oppose McConnell

After former President Donald Trump called Senate Minority Leader Mitch McConnell a “broken down hack” and questioned his leadership, Steve Bannon asked why the former president opted to back McConnell-endorsed candidates in the past. Trump has backed a number of pro-establishment candidates since 2016, drawing the ire of his base in a number of races. The War Room host — who formerly served as a key advisor to President Trump — listed a number of races where Trump dropped the ball in a GETTR post.

Trump referred to McConnell as a “broken down hack” after the leader cast doubt on the GOP’s chances of retaking the Senate in November. McConnell, 80, cited polls that have GOP Senate candidates Blake Masters, Herschel Walker and Dr. Mehmet Oz down by sizable margins in making his bleak outlook. Reliable pollsters such as Trafalgar Group have found smaller margins, but McConnell has only pledged sizable support to the J.D. Vance campaign in Ohio.

“Mr. President — if this is true then why did the people around you convince you to support so many horrible losers that support McConnell and not MAGA and certainly not you,” Bannon wrote in reference to Trump’s anti-McConnell statement. “Crapo, Boozman, Moran, — all three could have and should have been primaried by Trump-endorsed MAGA candidates… but they were not,” he continued. 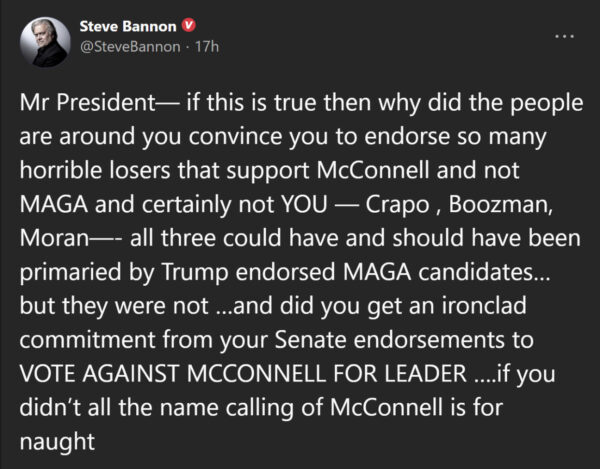 Trump opted to endorse incumbent Senators John Boozman (R-AR), Mike Crapo (R-ID) and Jerry Moran (R-KS) instead of more offensive-minded challengers. Boozman — who clinched nomination with relative ease earlier this year — echoed McConnell in condemning Trump for January 6 and opted not to challenge the results of the 2020 election.

Jake Bequette — a former NFL player and Army veteran who challenged Boozman in the primary — accused the Senator of being a fair-weather Trump supporter. “There are too many Republicans who only support President Trump when it’s convenient for them. You know, Sen. Boozman was against President Trump from the very beginning,” Bequette said in the lead-up to the election.

While Bannon and other key Trump allies have praised a number of his Senate endorsements, they still believe he is too trustworthy of McConnell.

In his GETTR post, Bannon asked why Trump did not vet his endorsed candidates by gauging their support for McConnell’s leadership. “Did you get an ironclad endorsement from your Senate endorsements to VOTE AGAINST MCCONNELL FOR LEADER…. if you didn’t all the name calling of McConnell is for naught,” Bannon continued.

Trump’s endorsement of Dr. Mehmet Oz in Pennsylvania has particularly drawn the ire of his base in 2020. Oz narrowly survived his primary against hedge fund CEO David McCormick in April, his win all but exclusively attributed to Trump’s endorsement. Kathy Barnette was seen as the true “MAGA candidate,” however, who ultimately finished not far behind both McCormick and Oz despite a massive spending disadvantage.

Oz is currently trailing current Lieutenant Governor John Fetterman by four points in Trafalgar’s latest poll, while Democrat-leaning pollsters have Fetterman up by as much as ten percentage points.

Trump notably went against his former advisor in the tumultuous Alabama Senate race in 2018, opting to back McConnell’s choice in Luther Strange as opposed to Mo Brooks, who had garnered support from a number of key America First figures. Trump again opted to back Luther Strange in the primary against Roy Moore.

Trump’s truce with McConnell did not last either, as the leader would go on to accuse the former president of inciting a “violent insurrection” on January 6, echoing leftist talking points. In addition, McConnell floated the idea of supporting an impeachment conviction during the second trial, according to numerous reports.