The Cybersecurity and infrastructure Security Agency (CISA), a sub-bureaucracy of the Department of Homeland Security (DHS), collaborated with Maricopa County Recorder, Stephen Richer, on how to control the media narrative on the 2022 Midterm Congressional Election.

One of Donald Trump’s 2024 campaign attorneys, Christina Bobb, highlighted alleged collaboration which occurred between the Maricopa County Recorder, Stephen Richer, and the Cybersecurity and Infrastructure Security Agency (CISA), a department under the control of the Department of Homeland Security (DHS), ahead of the 2022 midterm elections. Bobb was interviewed on The Absolute Truth with Emerald Robinson on Friday.

“That they marked it for official use only shows that they wanted to keep this secret,” Bobb explained.

President Donald Trump's attorney @christina_bobb uncovers documents that reveal CISA was working with Maricopa County to censor election information and keeping it from the public.

“CISA is, as you mentioned, under the Department of Homeland Security. If we remember back in 2020, it was Chris Krebs, the Director of CISA, who I actually worked fairly closely with at DHS, he was the one who came out and said ‘This was the most secure election in US history,’ and tried to provide some level of comfort to the American public, saying ‘Oh don’t look closely don’t look closely,’ and yet its the same organization that is partnering with state officials and big tech to change the narrative, to lie to the public,” Bobb said.

The attorney then elaborated and claimed that some of the information contained in the official CISA documents is false.

“A lot of the information that’s just listed in those documents isn’t even accurate. It’s the narrative that they want told, so this is very much about pushing one side and they’re using government officials to do it, which violates the 1st Amendment and it’s potentially criminal conduct if they are actually interfering with the outcome of an election,” Bobb stated.

Bobb highlighted the connection to Stephen Richer in light of a lawsuit filed by Republican Nominee for Governor of Arizona, Kari Lake (R), which challenged November’s highly contentious election results in the Grand Canyon State.

“This popped up as particular interest to Arizona because Stephen Richer, who largely ran the Arizona Election and certainly as you know it’s very contested. Kari Lake is filing her challenge today. So it’s very pertinent to what’s happening in Arizona and the outcome of the Arizona election,” Bobb said.

Elected in 2020, Stephen Richer is the Maricopa County Recorder, based in Phoenix, Arizona.

On March 29th, 2022, a meeting was held between Maricopa’s Stephen Richer and the Protecting Critical Infrastructure from Misinformation & Disinformation (MDM) Subcommittee, which is a part of the CISA Cybersecurity Advisory Committee (CSAC). 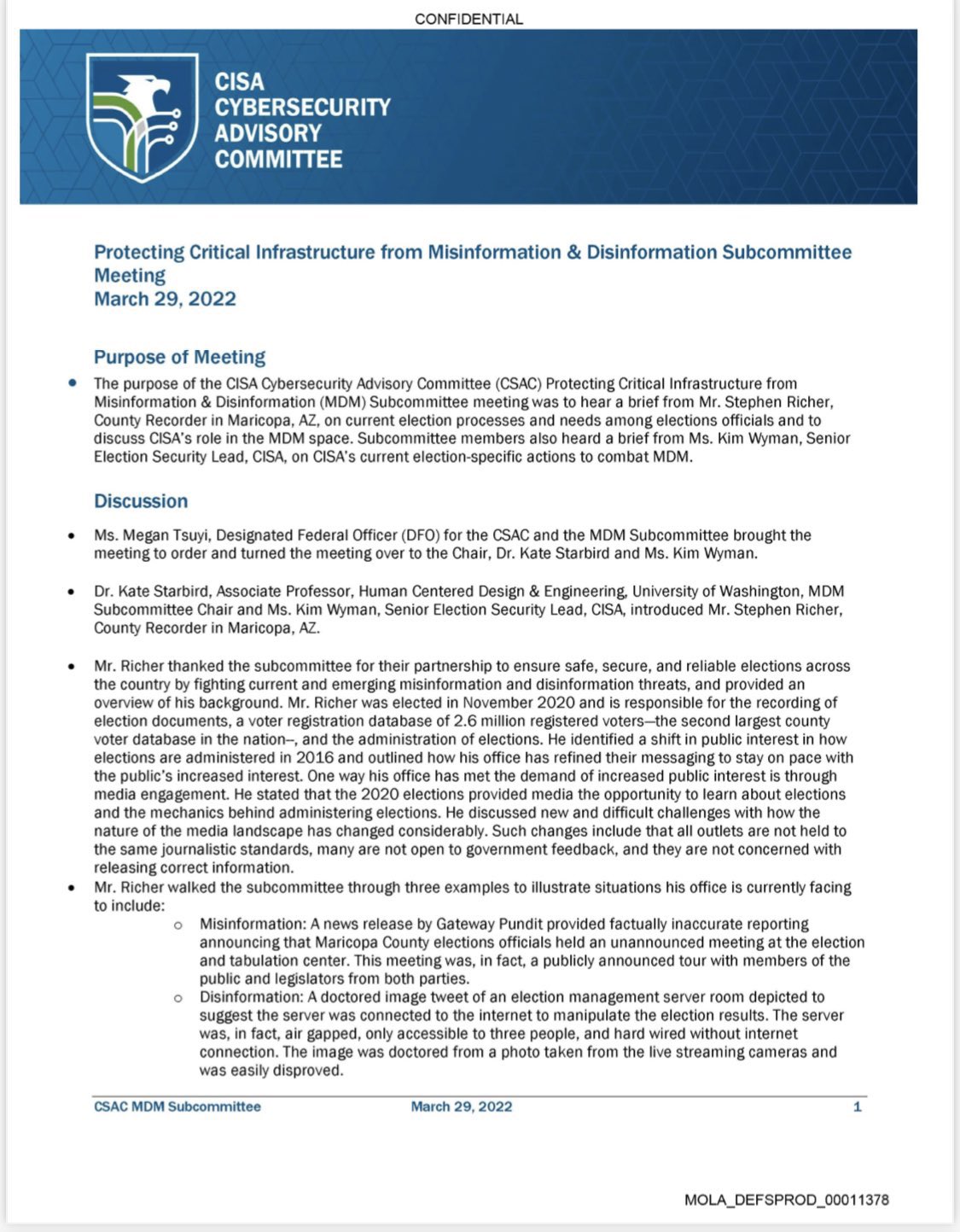 “Mr. Richer thanks the subcommittee for their partnership to ensure safe, secure, and reliable elections across the country by fighting current and emerging in misinformation and disinformation threats, and provided an overview of his background. Mr. Richer was elected in November 2020 and is responsible for the recording of election documents, a voter registration database of 2. million registered voters – the second largest county voter database in the nation – and the administration of elections.” 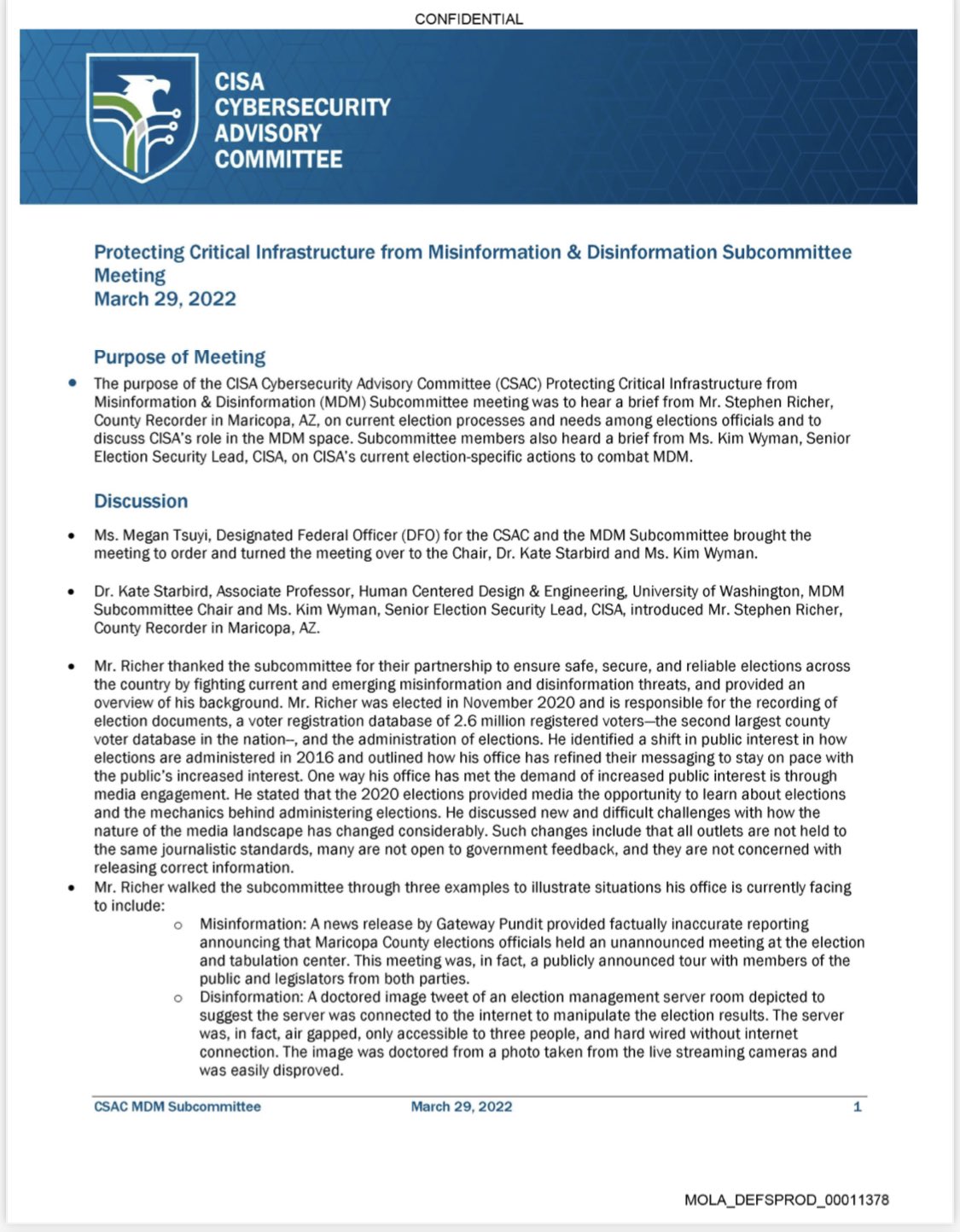 CISA was briefed by Richer “on current election processes and needs among elections officials and to discuss CISA’s role in the MDM space.”

We know @CISAgov worked with Big Tech to alter the narrative around elections. This proves they were doing it with the intent to keep their activities hidden from the public. @stephen_richer cooperated with a federal agency cooperating with Big Tech to manipulate elections…

“Maricopa County’s election is already highly suspect. Now, we have documented proof that the man partially responsible for the records was actively working with a federal agency, CISA, part of DHS, to manipulate the outcome of the election he ran….without disclosing it,” Bobb said on Wednesday.

“This is ongoing. there’s other lawsuits involved in this, we know the Louisiana attorney general Jeff Landry is involved in a case with Missouri against CISA on this exact issue, looking into it as well so we have multiple states looking at this across the board and its particularly concerning because CISA is a federal government [agency] that’s impacting every state in the country so this has very very big ramifications,” she told Robinson.

Bobb also agreed with Robinson’s assertion that Chris Kreb and Chad Wolf are good friends. “I can’t say firsthand, but that’s my belief,” Bobb said of their relationship.

The atorney then raised the topic of the lawsuit filed by Kari Lake on Friday.

“I absolutely have a lot of confidence in this lawsuit. Kari Lake has the law on her side, she has the facts on her side. I think when people see and have time to digest what’s in her lawsuit, people are going to be outraged. My hope for this case is that it’s so explosive that the courts can’t sweep it under the rug,” Bobb stated. “In 2020, we were up against the clock, we didn’t have a lot of time. It was the first time that the teams were really investigating this type of cheating and we kind of ran out of time. We had affidavits, we had evidence but it was very fresh and very new.”

“Well, they have had two years to look into this and there’s information out there. there’s lots of evidence available and we’re going to see it in that lawsuit,” Bobb said.

“Ultimately, regardless of how it comes out at the trial court level, I do think that this is a case that will probably end up at the Arizona Supreme Court and we’ll see what they do with it. I don’t know how you can possibly look at a state and say it’s appropriate for the federal government to be manipulating the information.”

“Katie Hobbs, the secretary of state who was the Democrat, was also collaborating with Twitter and getting political speech removed. So you have this mechanism where people get to control the levels regardless of party. It doesn’t matter. I don’t know how the AZ supreme Court with any sense of integrity can say yeah that’s okay,” Bobb said. “It’s not okay. It’s not what people want. It’s not what people expect from their leaders and quite frankly, it’s just not fair.”

.@TuckerCarlson: "Staffers for the Secretary of State of Arizona, ordered by gubernatorial candidate and then-Secretary of State @KatieHobbs directed censorship through CISA…this is illegal. This is a crime. A crime against our Democracy." pic.twitter.com/XsCtFqypCp