Following an explosion in Poland on November 15th, the Associated Press jumped to the false conclusion that Russia had launched missiles into the NATO member country.

An Associated Press reporter lost his job after erroneously reporting a story about the Russia-Ukraine conflict.

Following an explosion in Poland on November 15th, the Associated Press jumped to the false conclusion that Russia had launched missiles into the NATO member country.

The report’s basis was reliant upon an anonymous source, allegedly from a senior U.S. intelligence official. Following the AP piece, mainstream media outlets across the world spread the fake news report, adding to anti-Russia sentiments and leading many to call for the United States to take military action against Russia.

On Monday, the Daily Beast reported the Associated Press issued an internal probe into James LaPorta, the investigative reporter who first made the erroneous claims working with the AP.

LaPorta’s contract with the AP was terminated, both the Daily Beast and Washington Post reported.

The AP eventually removed LaPorta’s story, adding an editor’s note admitting the story was erroneously reported and that the missiles were “most likely fired by Ukraine.”

“In earlier versions of a story published November 15, 2022, The Associated Press reported erroneously, based on information from a senior American intelligence official who spoke on condition of anonymity, that Russian missiles had crossed into Poland and killed two people. Subsequent reporting showed that the missiles were Russian-made and most likely fired by Ukraine in defense against a Russian attack,” the correction reads. 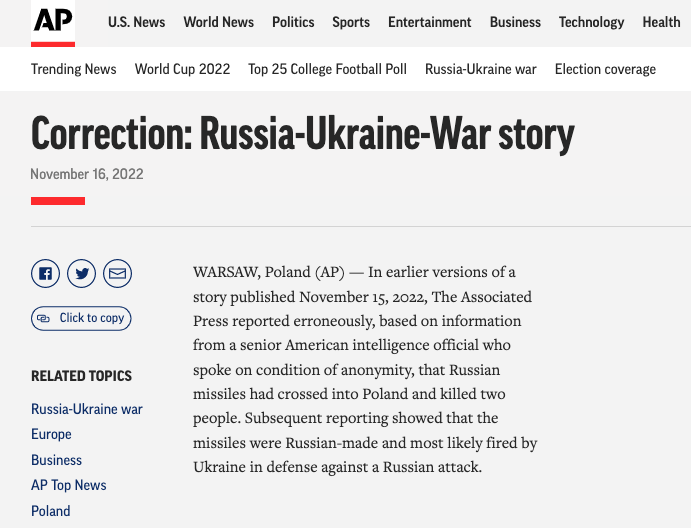 Following an investigation by Poland and NATO, it is believed the missile was a Ukrainian air defense missile.

LaPorta’s original report may not have even met the AP’s own standard for reporting. The Associated Press claims material from anonymous sources can be used if:

“1. The material is information and not opinion or speculation, and is vital to the report.
2. The information is not available except under the conditions of anonymity imposed by the source.

3. The source is reliable, and in a position to have direct knowledge of the information.”

“The AP routinely seeks and requires more than one source when sourcing is anonymous. Stories should be held while attempts are made to reach additional sources for confirmation or elaboration. In rare cases, one source will be sufficient – when material comes from an authoritative figure who provides information so detailed that there is no question of its accuracy,” the AP’s “News Values and Principles” claims.

One AP employee said LaPorta lied to AP editors by claiming a senior manager already vetted his source to give them “the impression that the story’s sourcing had been approved.”