"I was not given any notice, I was not contacted, nor was I notified of any infringement or violations" Peters said

Apple Podcasts has abruptly removed The Stew Peters Show without providing a reason, Peters announced in a Telegram post on Monday. “I was not given any notice, I was not contacted, nor was I notified of any infringement or violations of any user agreements,” Peters wrote. Spotify and iHeartRadio already banned the wildly popular show earlier this year, citing “COVID-19 misinformation” policies.

“Millions and millions and millions of people listened to and downloaded the daily show from that platform, and I never took one penny by monetizing that distribution,” Peters continued. “Apple is a complete disgrace, a pro-communism company a pedophilia-enabling, free speech-suppressing, disgusting extension of satan himself.” 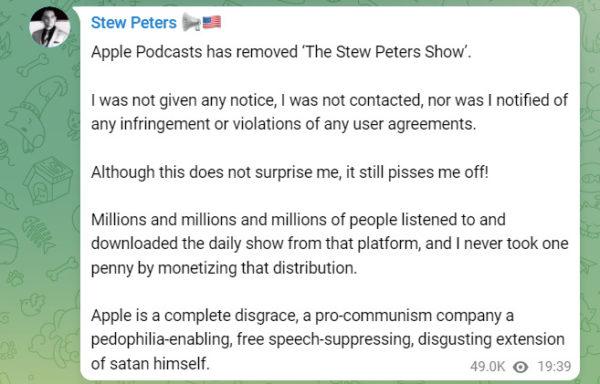 The Stew Peters Show had become a staple of Apple’s top 10 political podcast charts since last summer. The show gained a following thanks largely in part to its willingness to cover the effects of the pandemic and associated mandates from angles the corporate press chooses not to. At the time of the ban, the show trailed only the likes of Tim Pool, Ted Cruz and Bannon’s War Room inside the top ten.

Apple’s abrupt move comes a little over a month after the show was yanked from iHeartRadio. Additionally, the show was pulled from Spotify last fall, while Peters himself was banned from Twitter this past August after reporting on the deaths of two Australian children who died after complications from a COVID-19 vaccine.

iHeartRadio even dropped an entire radio station, Mojo Radio 5-0, over its refusal to drop the Stew Peters Show. Executives from the podcasting giant provided no reasoning for the ban, saying only that Peters was a source of “dangerous misinformation.”

“Removing ‘The Stew Peters Show’ is a slap in the face of liberty-loving people around the globe, and a disgusting, shameful display of cowardice,” Peters said following the iHeartRadio ban. “I highly doubt iHeartRadio and Spotify will be removing the propagandist lies and paid advertising from big pharmaceutical companies responsible for the real deaths of millions of people, which is indisputable proof that iHeartRadio and Spotify are willing to accept blood money in exchange for the killing of your fellow global citizens, neighbors, friends, loved ones and family,” he continued. “It’s a total disgrace.”

Despite the bans, The Stew Peters Show continues to grow its audience. The show is available on Rumble, where its channel has amassed over 320,000 subscribers.  The program is also distributed via Red Voice Media.