An antifa terrorist who targeted a rally in support of a January 6 political prisoner was released from jail without posting bond on Thursday. Garrett Smith, 22, was arrested and slapped with multiple charges after bringing an explosive device to a rally in support of political prisoner Jeremy Brown. A special forces veteran, Brown has been held in prison for months on misdemeanor trespassing charges stemming from January 6. The story was first reported by DJHJ Media.

Smith was arrested last month and charged with three counts of possession or discharge of a destructive device and one count of loitering and prowling. Police say Smith had an active pipe bomb on his person while a search of his home found more explosives, tape and nails for grenades, and a “direct action” checklist that included Antifa iconography. According to local Sheriff Bob Gualtieri, officers chased Smith — who “stuck out” by being dressed all in black — when he suddenly sprinted away from the rally.  “It could have been very destructive, and he could have hurt a lot of people,” Gualtieri said of the bomb.

Smith was held on a $300,250 bond but was released from the Pinellas County Jail on his own recognizance last Thursday. This means Smith did not have to post bail and simply had to agree to show up for court dates in order to be released. Jeremy Brown — a combat veteran — has been held in the same jail on misdemeanor trespassing charges. Brown has repeatedly been denied bail. 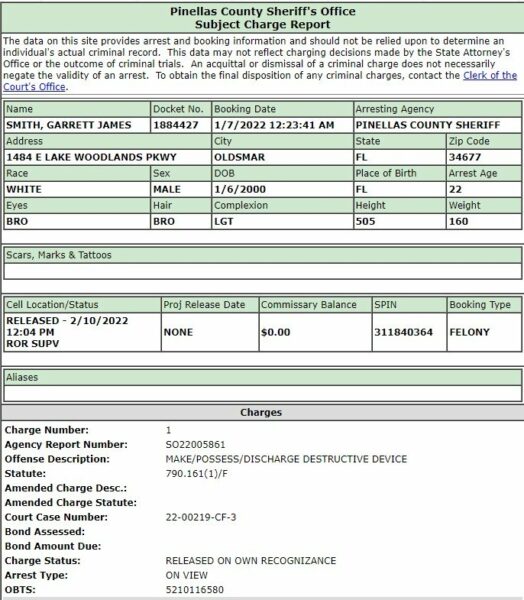