The White identity group Nationalist Social Club 131 (NSC 131) is distinguishing itself as part of a new vanguard of pro-White organizations determined to protect White people and stop the White genocide pushed by both the progressive left and the globalist corporatist Republican establishment. NSC 131 has been around for years in New England. Now, with America’s borders essentially open and anti-White hatred on the rise, NSC 131 is gaining traction and planning to expand. NSC 131 leaders spoke exclusively to NATIONAL FILE to address recent controversy surrounding the group, to explain the group’s mission and tactics, and to deny the talking point pushed by conservative influencers who instantly label Pro-White activists as “Feds.”

“It speaks to the dynamic we live in today in which white people are being pushed in every way and we are relegated to being quiet and taking it,” NSC 131 leader Chris Hood told NATIONAL FILE, referring to the banner that NSC 131 recently hung on an overpass to appeal to drivers heading into the city of Boston. The banner read: “White Patience Has Limits.” NSC 131 leaders made clear that they see Zionist Jewish ethnonationalism as a driving force pushing White Genocide — including mass immigration — in Washington, D.C. and in the media and halls of academia.

“But now with groups like us and Patriot Front, and the America First Political Action Conference with Nick Fuentes, this issue is rising to the forefront and these groups are taking physical space,” Chris Hood said, noting the massive amount of violence that racial minorities commit against American whites while “it’s so rare that a white kills a black.” 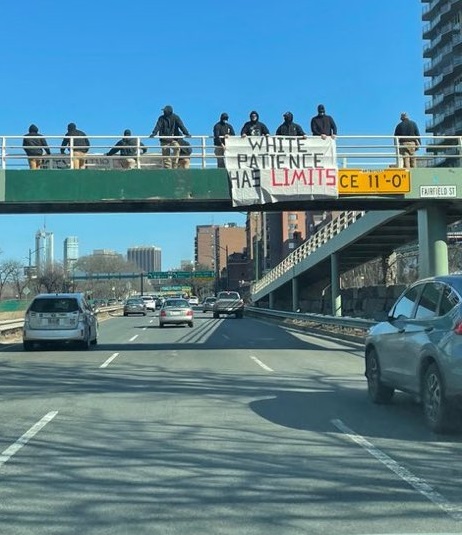 The Western Chauvinist recently stated on Gab: “NSC 131 shuts down a reading of The Communist Manifesto in Providence, Rhode Island. Look when a commie comes to confront them, after the “technical issues” he appears to have slipped and fallen, clumsy of him. If you’re in New England and a White Nationalist you should look into joining them,” linking to a video of a confrontation that NSC 131 had with a leftist. NSC 131 videos can also be viewed on Odysee.

Chris Hood stated: “I would say we are not really a political representation. We are much more metapolitical. We are trying to create a vanguard of white New Englanders. As things get more turbulent, we lose more political representation. White people will have less money, they’ll have fewer possessions, they’ll be more vulnerable. We are a fraternity of young action-oriented white men. We can defend them from Antifa and Black Lives Matter. Even if people don’t support us we will protect them anyway. If we can create a vanguard for our people, it won’t really matter how mean our views are when we’re the only ones stepping up to defend them.”

Chris Hood said that “We are not a national socialist group. We do include people from across the right wing spectrum including some national socialists. We notice that the left is able to organize Stalinists, Maoists, just liberals all together against us, against white identity. So everybody who is for white identity should be on the same team. As for now our number one issue is survival.” Hood noted that Black Lives Matter accelerated the situation in America, saying it’s “not good for white people to get beaten by mobs of angry Africans in the streets.”

So why does the group hide their faces and maintain relative anonymity? “We are normal guys who have jobs, guys go to college, we have families, homes. If we didn’t wear masks, there would be non-governmental corporate conglomerates and Antifa hunting us down. We would have a million people call our work call CPS and get the kids taken away,” Chris Hood explained, drawing attention to the significant problem of politically-motivated CPS reports against parents in America. “We don’t want anybody to go to jail. We are peaceful First Amendment activists.”

Liam, a member of the group, said: “Antifa did dox me. I got fired from my job. They put flyers all over my town. Every few months the flyers go up. It’s a hassle.”

Why do so many conservative influencers and their conservative followers want to label pro-White groups as “Feds,” and what will it take for the paradigm to change to encourage more conservatives to support pro-White Identity movements?

Chris Hood noted that “We do physical training, sparring, MMA stuff, hiking, workouts. We make sure our people can defend themselves.”

Pure Power, one of the leaders of the group, said that “Being physically fit is very important. Nobody’s going to respect you if you don’t respect yourself and you look like shit.”

Pure Power is confident that more people will support the group’s cause. Pure Power said, “The tide will turn when comfort is gone.” The group is not opposed to the idea of secession from the globalist United States of America, but the circumstances for a national divorce remain unclear. “I support balkanization,” Pure Power stated.

Chris Hood explained: “A group like ours, there’s only so many things we can do to show people what’s going on in the paradigm that we live in. We can challenge political things. We challenged Critical Race Theory in New Hampshire, anti-white women’s hospital policies, drag queen story hour. But when we have the economic despair and social unrest on a regular basis, then people will really understand the dynamic we are living in. We would like to remain in our New England states ideally, but a territorial thing is on the table. In 5 years our networks will be a lot bigger. You’ll be seeing a lot more of us, organizing our people, and disrupting those who wish to see the White Race die.”