Florida hair and makeup artist and mother of three Angelique Contreras received an intimidating late-night knock on the door from a law enforcement officer in Palm Beach County after she published anti-mask posts on Facebook. NATIONAL FILE has obtained video footage of this disturbing 10:30 PM encounter. Contreras verbally confirmed with the Palm Beach County Sheriff’s Office that it was a sheriff’s officer who made the house call.

According to Contreras, Palm Beach County is trying to send citizens who can’t wear masks due to medical exemptions into a parking garage basement while County Commission meetings take place. Local press reporting confirms that mask-exempt citizens who want to speak at meetings will be sent to a separate building beneath a parking garage, instead of being able to address their leaders directly. When a man on Facebook joked about dumping garbage onto a County Administrator’s lawn, Contreras replied with the retort, “thousands of Mask(s).” This was enough to get the sheriff’s office to show up to her house, with the officer making clear that such Facebook posts are monitored in this day and age. Contreras’ children are aged 11, 3, and 1.

“No matter what a person’s political beliefs are, I do not believe anyone deserves to be bullied by our local government officials. We should not be intimidated by law enforcement. What happened at my house was clearly political intimidation,” Angelique Contreras, who hails from a family of patriotic Cuban refugees, told NATIONAL FILE. “I know what Communism is and we have been living in it for the past year.”

Contreras replied to a friend’s joke, stating that they could leave “thousands of Mask” on a county commissioner’s lawn. Contreras said the post could be interpreted to mean leaving masks on public property where county government meetings take place. 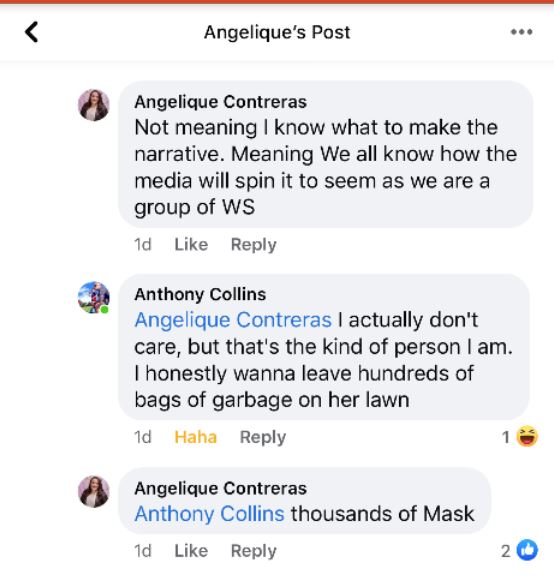 “As a United States citizen I do have the right to peacefully protest on any public property and I don’t understand why I was chosen to be intimidated and harassed for my posts,” Contreras said. “In regards to my situation, I want to know who’s watching my Facebook page, who is the unknown citizen who was on my property and the officer’s dereliction of duty, and who gave the order.”