The Wall Street Journal is paying Twitter to promote an article that describes the need for vaccine passports to please airlines, who are apparently being deceived by large numbers of passengers presenting falsified proof they received one of the controversial COVID-19 vaccines.

In a promoted post on Twitter, the Wall Street Journal declares that “Airlines are battling a scourge of passengers traveling with falsified COVID-19 health certificates, with test results easy to manipulate. Because of that, vaccine cards may be coming.” In the article, it becomes clear the “vaccine cards” described by The Washington Post are the distrusted and often banned vaccine passports proposed by the Biden administration. 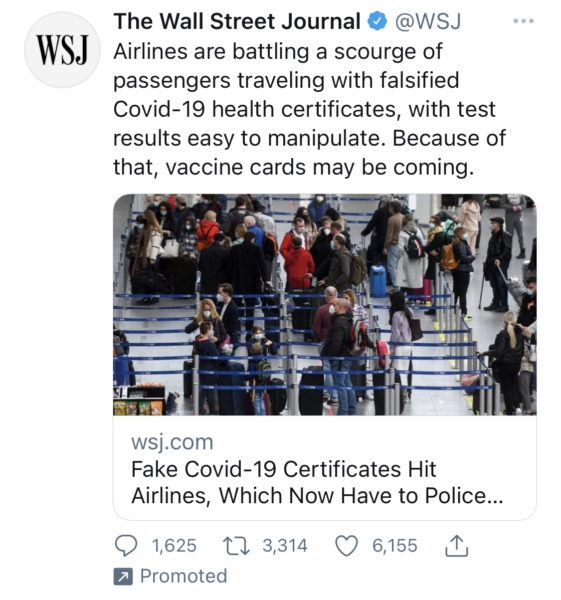 The article, dated April 13, 2021, is titled “Fake Covid-19 Certificates Hit Airlines, Which Now Have to Police Them”. The article makes the case for universal COVID-19 passports to please airlines, who in turn must please international governments who are requiring proof of vaccination or proof that individuals do not have COVID-19 prior to entering flights. According to the Wall Street Journal, this constitutes a need for the highly partisan and extremely controversial vaccine passports.

“Airlines are pushing for digital health passes that can store vaccine certificates and the results of Covid-19 and antibody tests,” the article reveals. “The industry says this will make it easier to track the veracity of documents and avoid the need to physically check them at airports. But even this sort of system “will not stop people still trying to bring fraudulent certificates,” said Akbar Al Baker, chief executive of Qatar Airways Ltd.”

Previously, the Washington Post revealed that the Biden regime is working with top corporations in the private sector to develop a digital vaccine passport that must be presented on smartphones. The Post explains that Biden and those around him want the vaccine passports to be entirely driven by the private sector, using large corporations to force private citizens to engage in their system of tracking in order to participate in the modern economy, rather than using the force of the federal government.

“The passports are expected to be free and available through applications for smartphones,” the Post reported in March. “Which could display a scannable code similar to an airline boarding pass. Americans without smartphone access should be able to print out the passports, developers have said.” The far left newspaper added, “There is evidence vaccine passports could motivate skeptical Americans to get shots. Several vaccine-hesitant participants at a recent focus group of Trump voters led by pollster Frank Luntz suggested their desire to see family, go on vacation and resume other aspects of daily life outpaced fear of the shots, particularly if travel companies and others moved to require proof of vaccination.”

National File’s coverage of the vaccine passport program led many Republican states to ban their use, with Florida Gov. Ron DeSantis almost immediately issuing an executive order to that effect. Soon after, the Florida legislature passed a bill to ban private companies from requiring COVID-19 vaccine passports in the state, which was promptly signed by DeSantis.