Raking in a whopping 77% of the general election vote, Wren Williams will join a new Republican majority when he’s sworn in to Virginia’s House of Delegates. The GOP will also enjoy total domination of statewide elected offices, a stark contrast to recent years of single party Democrat rule following what can only be described as a “red wave” of historic proportions.

In a press release made after he declared victory, Wren Williams thanked God, his family, and the Virginians who supported his campaign before vowing to fight for the people of largely rural Southwest and Southside Virginia against ultra-liberal Northern Virginia Democrats who often threaten their deeply held values and way of life.

“In February, I jumped into this race because many people felt they had no strong voice for them in Richmond,” Williams said in the release. “Liberals in Northern Virginia have been running the whole state on their terms, with no regard for our livelihood and conservative values,” he continued. 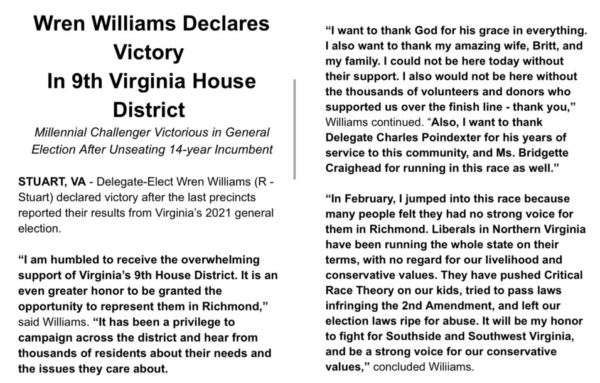 Trending:
POLL: Majority Of Republicans Say They Won't Vote For Any Candidate Who Claims Biden Won 'Fair And Square'

The often adversarial stance taken by Northern Virginia Democrats against those from other corners of the state became a centerpiece of the larger election cycle, with rural voters turning out in droves to support Glenn Youngkin and the GOP’s statewide ticket, as well as their local GOP candidates for State Delegate.

Williams highlighted the motivations of voters in his press release, pointing to Democrat attacks on the 2nd Amendment, the erosion of election integrity, and far-left school curriculum like Critical Race Theory as key election issues.

“They have pushed Critical Race Theory on our kids, tried to pass laws infringing on the 2nd Amendment, and left our election laws ripe for abuse,” said Williams, who has promised to introduce legislation banning CRT in Virginia’s schools. “It will be my honor to fight for Southside and Southwest Virginia, and be a strong voice for our conservative values.”

Local Democrats even sported massive posters and signs in support of Poindexter, who was often labeled a “RINO” by his constituents and made the baseless claim that no fraud took place during the 2020 Presidential Election.

A majority of the Republicans won't vote for any candidate who says Biden won legitimately.
By Andrew White  January 28, 2022 Comment MoreShare

The Loudoun County school bathroom rapist has escaped being put on the sex offender registry, after the CA for the county made a "mistake"
By Jack Hadfield  January 28, 2022 Comment MoreShare

Parents were kept in the dark as the National Institutes of Health spent $8 million researching the sex habits of underage teen males.
By Jack Davis, The Western Journal  January 28, 2022 Comment MoreShare

It appears that the FDA and Pfizer want to put the brakes on a judge's order that would give the American people information on the vaccine.
By Jack Davis, The Western Journal  January 28, 2022 Comment MoreShare

A bridge in Pittsburgh collapsed on Friday morning, only hours before Biden was due to visit the city to promote his infrastructure bill.
By Jack Hadfield  January 28, 2022 Comment MoreShare