Sgt. William Kelly of Norfolk Police has been fired by the department after he anonymously donated to the legal defense fund of Kyle Rittenhouse, who says he shot multiple Antifa rioters in Kenosha, Wisconsin in self defense last year.

On Friday, the Guardian reported that the Christian crowdfunding website GiveSendGo had been subject to a data breach, with the leftist hacking organization Distributed Denial of Secrets publishing the breach on their site. One of the fundraisers on the site was the legal defense fund of Kyle Rittenhouse, the teenager who defended himself against multiple antifa rioters during the violent clashes in Kenosha, Wisconsin, last year. Rittenhouse stands accused of the murder of two of those he allegedly shot, with a third man having survived the encounter.

In reporting the data breach, the Guardian highlighted a number of public officials who they claim donated anonymously, with the breach linking emails to donations and messages. One of those who donated to Rittenhouse’s legal defense fund was allegedly Sgt. William Kelly of Norfolk Police Department, Virginia. “God bless. Thank you for your courage. Keep your head up. You’ve done nothing wrong,” Kelly allegedly wrote with his $25 donation. “Every rank and file police officer supports you. Don’t be discouraged by actions of the political class of law enforcement leadership.”

Kelly, who was serving as the executive officer of the Norfolk PD’s internal affairs division, was initially reassigned to another department after an investigation was opened up into his actions. Norfolk City Manager Chip Filer said in a press release on Tuesday that Kelly had been fired, as his actions were allegedly “in violation” of various City and departmental policies. “His egregious comments erode the trust between the Norfolk Police Department and those they are sworn to serve,” Filer said. “The City of Norfolk has a standard of behavior for all employees, and we will hold staff accountable.”

“A police department cannot do its job when the public loses trust with those whose duty is to serve and protect them,” said Norfolk Police Chief Larry Boone in a statement to residents of the area. “We do not want perceptions of any individual officer to undermine the relations between the Norfolk Police Department and the community.”

The news in Virginia follows another story resulting from the data breach in Utah, where a paramedic is currently under investigation for allegedly donating $10 to Rittenhouse’s legal fund. Jason Nguyen, a journalist for ABC4, even went so far as to show up to the paramedic’s house, doorstepping him and his family. “I tried to get the paramedic’s side of things,” Nguyen said in a tweet. 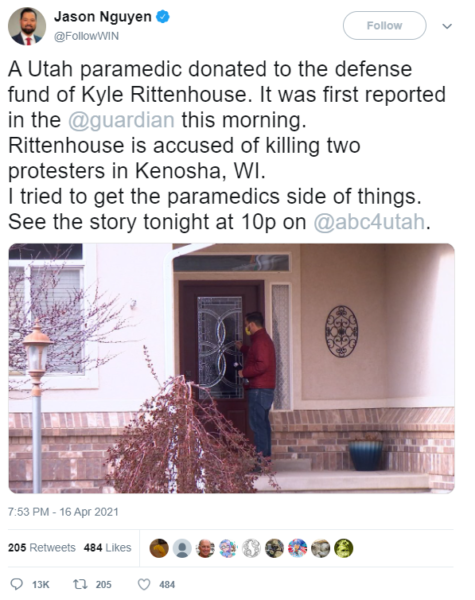 The action from Nguyen was swiftly condemned as harassment by many people online. “I’m a Democrat, and what you did… was harassment, and none of your business,” one commenter said. “Will you show the public where you live, so people can knock and ask you a few questions about this story?” another asked the reporter on Twitter. Nguyen’s account is locked at the time of writing.

I’m a Democrat, and what you did, contacting the paramedic, was not journalism, it was harassment and none of your business.

Will you show the public where you live, so people can knock and ask you a few questions about this story?

I donated to Kyle's defense fund, you wanna come knock on my door you foookin bell end?

“How dare [Joe Biden] do that to my son,” Wendy Rittenhouse said. “That’s my son that he did that too, and I’m not gonna back down to him. And [Kyle Rittenhouse] is not a white supremacist, and he’s not a racist. He’s my son, and I know him, and he is none that, what Joe Biden said.” She added, “Kyle is a caring young man. He went to Kenosha to help people. What Joe Biden did, showing my son’s picture and labeling him a white supremacist – I will take him down.”