Trump Slams Winsome Sears as ‘Phony,’ Reminds Youngkin That MAGA Made Him Governor

Despite Energy Crisis, Biden Vows to Dismantle Coal Mines in Favor of Solar and Wind Projects

“We had two terms with President Obama, and no engagement with the members of the Black Press, and with President Trump, we have one term and one engagement, with lots of future plans to build working relationships,” Raynard Jackson, Conservative campaign strategist and Pulitzer nominee, said.

READ MORE: Nancy Pelosi’s Son was Exec At Gas Company That Did Business In Ukraine

“The Democrats have met with us zero times,” Jackson said.

Jackson has been active with the Republican Party and with Black Conservatives since working with President George W. Bush.

“Grisham has made some promises that the administration would be available for Black Newspapers now, and she is delivering on that,” Jackson said, a frequent guest on leading radio programs and supporter of President Donald J. Trump.

“I believe that Trump values Black Newspapers. He values the relationships with Black Newspaper owners and journalists and he values having an open dialogue with us, where Obama just ignored us,” Jackson told National File.

“The Trump administration knows we need access to the right people with the right relationships, and I can bring that to the table. We will be working on other topics as well.” 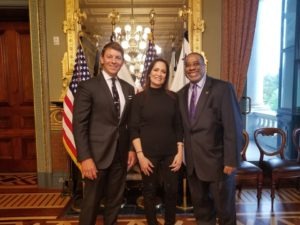 The joined forces of Black Media reach 20 Million weekly readers. Pastor Mark Burns was interviewed about his involvement with the meeting. “Raynard called me about getting to the White House. I made the call to the White House and within days we had a meeting set up,” Burns said. “This is about getting the message of what President Trump has done out to the readers thru the combined Black Media.  I was there to make sure the administration was respectful,” he said.

“Trump is undoing the 1994 Joe Biden and Bill Clinton crime bill.  We own our own business, we need access to the White House Press to get the news out about what Trump has done to help us.  We will see the President’s speeches in the Black Media right from him now,” Burns said. “That is straight from the Horse’s mouth to us.”

Trump Slams Winsome Sears as ‘Phony,’ Reminds Youngkin That MAGA Made Him Governor

Despite Energy Crisis, Biden Vows to Dismantle Coal Mines in Favor of Solar and Wind Projects