The assistant professor, Ted MaCoy, tweeted that any work submitted to him which cites Jordan Peterson will receiving a failing grade.

A university professor promised that any student who cites Dr. Jordan Peterson will be given an “F” on their assignment.

At the University of Calgary Ted McCoy, a “historian of prisons and punishment,” and assistant professor of sociology confirmed student rumors of his grading policy.

McCoy, who is a self described “anti-fascist” tweeted out acknowledging the legitimacy of any report that you students ill fail his class if they cite Peterson.

The tweet has been archived, and read, “I heard it rumored students will fail my class if they cite Jordan Peterson and I’d like to clarify that this is absolutely correct.” 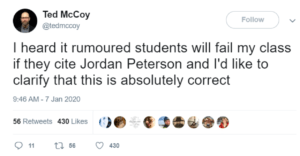 McCoy has since deleted this tweet with this statement to replace it with what some are calling a backpedal used to try to evade the trouble brought onto his life by admitting this biased censorship of his students.

The professor wrote, “Yesterday I made a joke about failing students in my courses if they cite an author I don’t agree with. I regret that it implied that I don’t take seriously my students’ right to free expression. I would never fail or penalize a student for a difference of political opinion.”

A Twitter user responded, “Ooh. Hard to backpedal from that one. Students deserve freedom of thought just like members of faculty.”

Ooh. Hard to backpedal from that one. Students deserve freedom of thought just like members of faculty.

McCoy describes himself as anti-fascist, and makes sure to reinforce that his pronouns are in fact he/him.

The University of Calgary where McCoy is employed includes all areas of personal interest to McCoy such as Social Inequality and Social Justice which is believed to be what inspired the tweet condemning Peterson.

In another tweet, the professor wrote, “I taught in post communist Czech. Students had been taught to agree with teachers’ views, show only ‘correct thinking’.”

“A student wrote an essay praising Thatcher, knowing it was against my views. I disagreed with her but gave her an A. Your job is to promote critical thinking,” he added.” 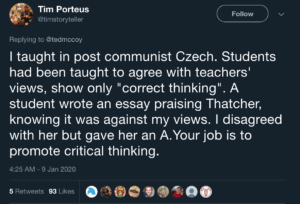