A poster distributed by the West Midlands Regional Organised Crime Unit in the United Kingdom has gone viral after being roundly mocked for claiming kids use Discord and Linux to commit illegal hacking.

The poster urges parents to contact authorities if they see Tor, virtual machines, Kali Linux, WiFi Pineapple, Metasploit, or Discord on their child’s computer, stating these programs are used by “hackers.”

Tor is described as a “browser used to access the dark web,” while virtual machines “hide operating systems not normally found on the computer,” such as Kali Linux, which the poster labels “an operating system often used for hacking.”

WiFi Pineapple is called a “bit of kit” used to “capture sensitive data over the internet,” while Metasploit is described as “penetration software that makes hacking simple.”

The most laughable assertion made by UK police on the poster is that gaming communications platform Discord is used “to share hacking tips.” 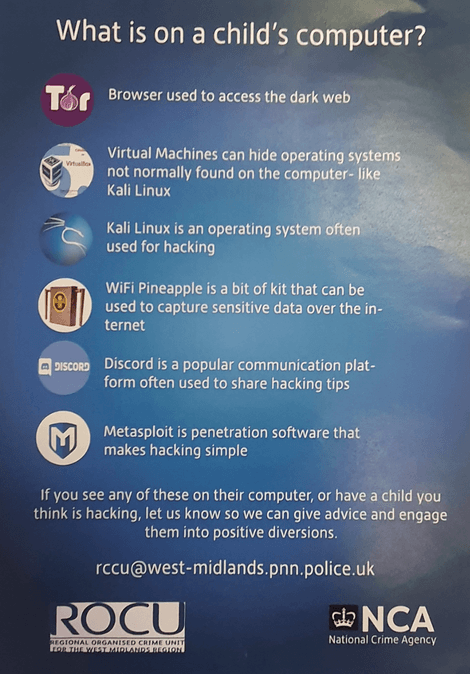 The warning has been roundly mocked by cybersecurity specialists, people who use the programs and services listed on the poster, and anyone with a modicum of understanding of how the internet works.

In reality, virtual machines (VMs) are a safe, perfectly legitimate way to run different operating systems and to test software without risking core computer systems. They can come in handy, for example, if software or games are designed for one operating system but are not compatible with another — such as playing a Windows game on a macOS machine or vice versa.

The Tor Browser is open source software developed by the Tor Project designed to protect your privacy and is especially useful for those in surveillance and censorship-based states, civil rights groups, activists, and journalists.

Developed by Offensive Security, Kali Linux is a valuable OS used to learn penetration testing. The operating system is used by security professionals worldwide in white-hat security roles, as is the Metasploit tool, and WiFi Pineapple is also used for penetration testing — but considering a price tag of a few hundred dollars, it is unlikely many kids have one of these stashed away.

While there are a range of people who use Discord servers, including Mountain Dew enthusiasts, gamers, anime fans, and political activists, underground hacking collectives are not considered to have any real prominence on the platform.

The UK’s National Crime Agency, whose logo is featured on the poster, has publicly distanced itself from the inflammatory infographic.

The agency denied being involved in the poster’s production while simultaneously defending the idiotic statements made therein, claiming “it is vital that parents and children know how these tools can be used safely.”

Good evening – the NCA was not involved in the production or release of this poster.

There are many tools which tech-savvy children use, some of which can be used for both legal & illegal purposes, so it is vital that parents and children know how these tools can be used safely.

West Midlands Police similarly distanced itself by claiming that the poster was “produced by a third party.”