Azeem Rafiq, a Muslim cricketer in England who cried in Parliament this week over alleged racism he encountered in the sport, has apologized after anti-Semitic comments from 10 years ago emerged.

Rafiq, 30, a Muslim cricketer of Pakistani descent, appeared on Tuesday in front of the Parliamentary Select Committee for the Department of Culture, Media and Sport, where he claimed that racism was rife within the sport. Rafiq argued that English cricket was “institutionally racist,” and that players of Pakistani heritage were regularly called “Paki” and other names by white players.

The cricketer, who broke down during his testimony, gave a number of examples of “banter” that he found offensive, such as English captain Gary Ballance referring to any non-white players as “Kevin,” which led to former England batter Alex Hales naming his dog “Kevin” because it was black.

The various accusations detailing “racism” in both the England and Yorkshire cricket teams, which were first revealed in September this year, has led to a number of firings and resignations from top names in the sport, rocking the cricket world.

However, following his emotionally charged appearance, a Facebook exchange from 2011 emerged between Rafiq and former Leicestershire cricketer Ateeq Javid, where they call a yet unnamed Derbyshire cricketer a “jew” for being reluctant to spend money on a meal out. Rafiq, who was 19 at the time, joked that the anonymous cricketer would “probs go after my 2nds again,” adding that “only jews do tht sort of sh*t ha.” 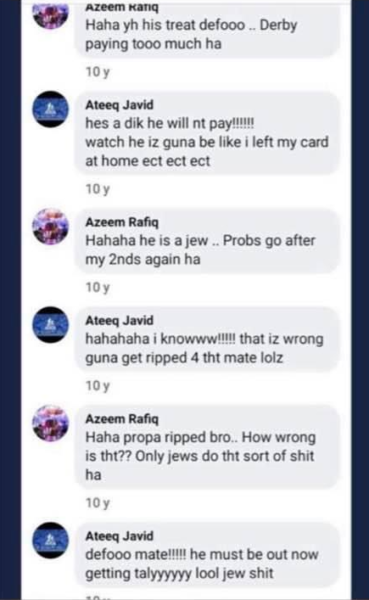 In a statement, Rafiq confirmed that the account in question was his, and profusely apologized. “I have absolutely no excuses. I am ashamed of this exchange and have now deleted it so as not to cause further offence,” Rafiq said. “I was 19 at the time and I hope and believe I am a different person today. I am incredibly angry at myself and I apologise to the Jewish community and everyone who is rightly offended by this.”

Last month, a number of staff at Yorkshire Cricket Club signed a letter to their board detailing the “extreme hurt” that Rafiq’s “one-man mission to bring down the club” had created, given his behavior in the changing room was apparently known to be “problematic.”

They argued that Rafiq had been given a “pedestal for his accusations” by the media for his claims of racism within the club and English cricket as a whole. “Azeem, his solicitors and various members of the media continue to make defamatory comments about the club, as well as targeting individual members of staff and the roles that they fulfill,” the letter read.

“There are endless episodes of Azeem’s behaviour, well-known to the club, which reflect on him as a person well before he decided to accuse the club, staff and players of any wrongdoing,” the letter continued. “We find it difficult to comprehend how this part of Azeem’s character has not been released or at least used by the club in its defence.”

Understandably, cricket fans are not impressed with Rafiq’s behaviour. One anonymous fan who has “played cricket for years” spoke to National File. The fan said the situation was “bullsh*t,” adding that “everyone knows that you have to take your fair share of sh*t, regardless of race. Azeez, like everyone, gave it as good he got. Welcome to a cricket changing room.”