Military Leadership Is At War With Tradition

The United States Navy is forming a new disciplinary squad to punish vaccine resisters, according to an unclassified NAVADMIN memo. The Navy policy document from Washington, D.C. states that a new “central authority” called the COVID Consolidated Disposition Authority (CCDA) will be the arbiter of punishing unvaccinated military members. The document states that the CCDA will “serve as the central authority for adjudication and will have at his or her disposal the full range of administrative and disciplinary actions.” Patriotic military heroes are outraged by the Biden regime’s actions. “Lastly, in paragraph 3.e.(5), the Navy is establishing some sort of gestapo COVID squad called the CCDA who will be in charge of doling out our punishments and determining our ultimate fate. Their guidance will be released in a “later” instruction,” a top U.S. Naval officer tells NATIONAL FILE. One of the punishments listed is “administrative separation” for a vaccine-refusing military member. 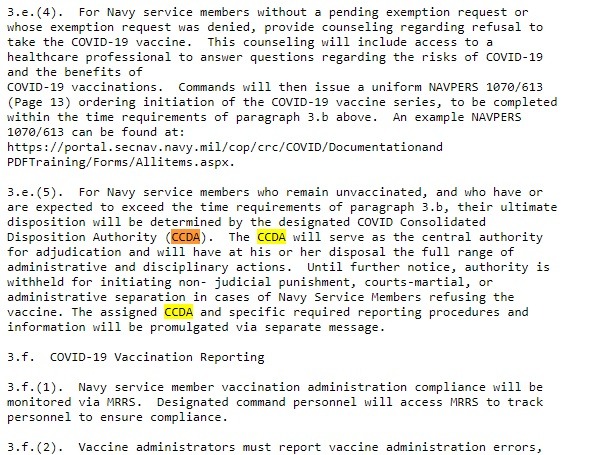