"I didn’t even have to go rally for Youngkin, because McAuliffe did it for me," wrote President Trump. "Thank you to the MAGA voters for turning out big!"

45th President Donald Trump sent a series of statements on Tuesday night noting his influence on the state’s elections, and thanking his base for turning out in support of Virginia Republicans, specifically Governor-elect Glenn Youngkin.

“I would like to thank my BASE for coming out in force and voting for Glenn Youngkin. Without you, he would not have been close to winning,” wrote President Trump. Youngkin was declared the victor earlier tonight, defeating former Virginia governor and failed electric car salesman Terry McAuliffe, who ran on a platform of stripping parental involvement form schools.

“The MAGA movement is bigger and stronger than ever before. Glenn will be a great governor. Thank you to the people of the Commonwealth of Virginia and most particularly, to our incredible MAGA voters!”

In an earlier statement, the popular 45th President wrote, “Early indications are that MAGA voters are turning out big for Glenn Youngkin, let’s see what happens.” He also noted delays in one heavily Democrat county, something that has become characteristic for the poorly run areas of the country. “All eyes are on Fairfax, why the delay?” 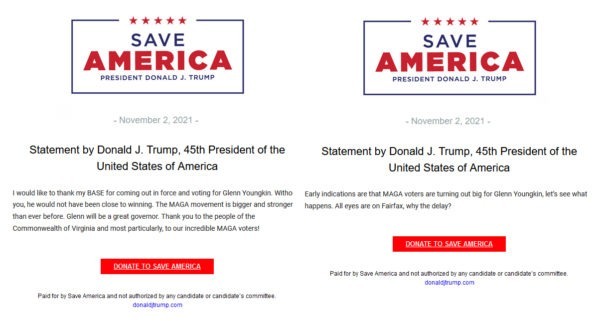 In a third statement, President Trump honed in on McAuliffe’s often-criticized insistence on portraying his campaign as an indictment against the 45th President, rather than opposing Glenn Youngkin.

While espousing some of President Trump’s key beliefs, the Governor-elect has remained visibly distant from President Trump. Many consider this to be an effort to attract independent voters, who may have a skewed perspective of the 45th President due to the state’s proximity to heavily-Democrat Washington, D.C.

“It is looking like Terry McAuliffe’s campaign against a certain person named ‘Trump’ has very much helped Glenn Youngkin,” wrote the 45th President. “All McAuliffe did was talk Trump, Trump, Trump and he lost! What does that tell you, Fake News?”

“I guess people running for office as Democrats won’t be doing that too much longer. I didn’t even have to go rally for Youngkin, because McAuliffe did it for me,” he added. “Thank you to the MAGA voters for turning out big!” 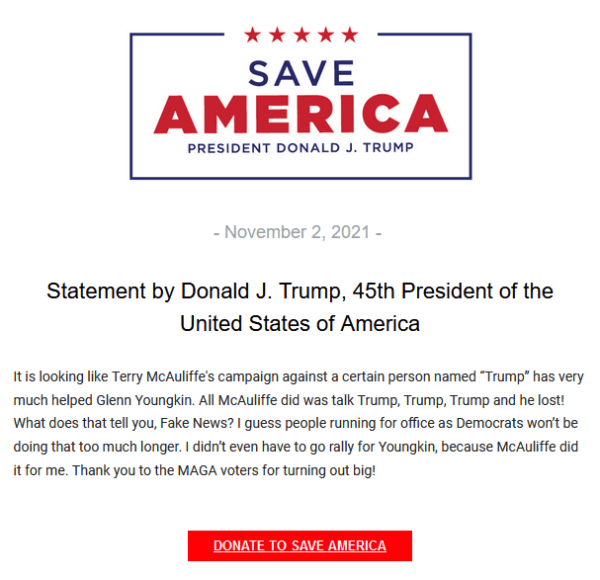