President Donald Trump’s legal team put forth a punishing takedown of the Democrat House managers in their opening arguments Saturday in Trump’s Senate impeachment trial. Trump’s lawyers deconstructed each Democrat talking point and obliterated the “Narrative” being pushed by Rep. Adam Schiff, who is crusading against Trump despite the fact that no Republican senators are expected to vote against the president. The lawyers (who mercifully kept the running time short) were so effective that the mainstream media did not know how to handle it, with CNN’s Jeffrey Toobin launching into a desperate tirade against the “white men” representing Trump.

Trump stands accused of abuse of power and obstruction of Congress for allegedly pressuring Ukraine president Zelensky to investigate the corruption of Democrat Joe Biden, who demonstrably used his influence to get a Ukrainian prosecutor fired after the prosecutor started looking into Burisma Holdings, the gas company that featured Biden’s son Hunter on its board. So far, there’s no indication that any witnesses will be called in this trial, as some Democrats desire, while Republican Sen. Ted Cruz has called for Hunter Biden to testify.

Here are the best Republican talking points, as offered by the lawyers who took turns speaking today on Trump’s behalf:

Democrats are basically engaging in election interference with this impeachment.

“The American people decide elections. They have one in nine months”

Schiff lied in front of the House of Representatives when he read a “parody” transcript of President Trump’s phone call as though it was the real transcript. “That’s fake,” Purpura said. “That’s not the transcript.”

No Democrat witnesses proved there was any Quid Pro Quo

Trump strengthened U.S. support for Ukraine from the previous administration, as confirmed even by former ambassador Marie Yavanovitch

House witnesses confirmed that there is tons of corruption in Ukraine

“The President was at all times acting in our national interest”

When President Trump refers to “us” in his phone call with Zelensky, he is referring to “us” the American people

Lieutenant General Kellogg said, “I heard nothing wrong or improper on the call”

Democrats are outright accusing Zelensky and his advisers of being “untruthful” when they say they were not pressured. “Tell me how that helps U.S. foreign policy and national security to say that about our friends.”

Why did Democrat House managers selectively cherry-pick from the thin evidence available in the case? “None of this fits their narrative and it wouldn’t lead to their predetermined outcome.”

Page 173 of the Robert Mueller report stated, “Ultimately the investigation did not establish that the campaign coordinated or conspired with the Russian government in its election-related interference activities.”

Schiff doesn’t like that Trump does not “blindly trust” the intelligence agencies, and instead Trump chooses his own people like Rudy Giuliani to carry out missions and offer advice.

The Trump Administration has reviewed or considered pausing or cancelling foreign aid to other countries, including threatening to stop the more than $500 million in aid to El Salvador, Honduras, and Guatemala, and outright cancelling $300 million to Pakistan, where terrorist Osama bin Laden was hiding out at the time of his 2011 death.

The Trump administration is not required to comply with subpoenas issued by Democrats Schiff and Jerry Nadler because a full House vote never provided proper authority for the subpoenas. 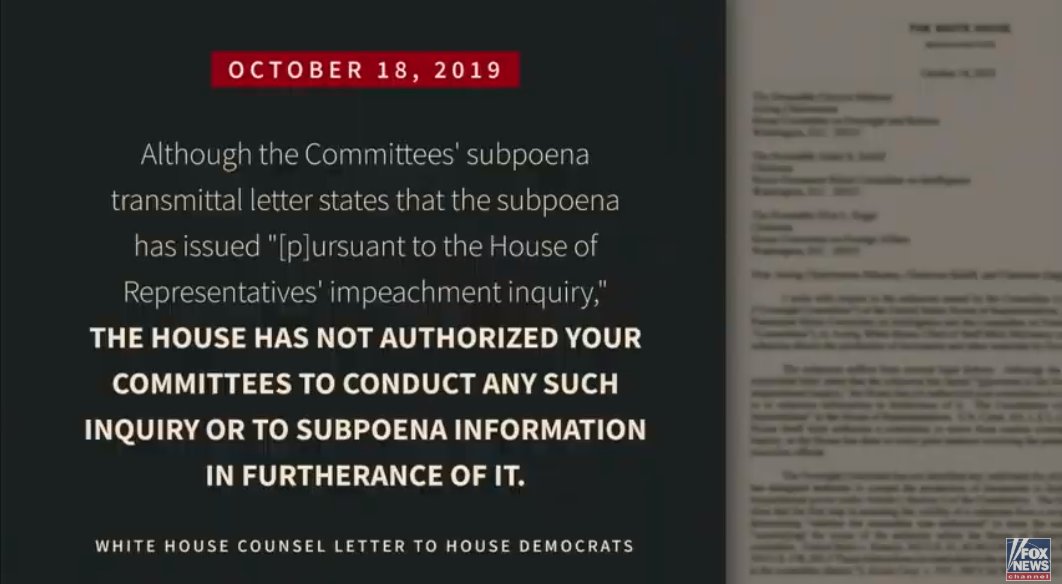 Not just the WH Counsel saying this.
Read the DOJ Office of Legal Opinion. 👇👀https://t.co/VmD64laMdb