During the Arizona Senate hearing in which the results of the forensic audit of Maricopa County were revealed, 45th President Donald Trump called for the 2020 election in Arizona to be immediately decertified, citing the evidence presented by the auditors.

“It is not even believable the dishonesty of the Fake News Media on the Arizona Audit results,” wrote President Trump, referring to several establishment media outlets suggesting that the audit’s finding that the total vote count provided by Maricopa County is accurate means the rest of the audit’s explosive findings are somehow invalidated.

President Trump noted that the audit “shows incomprehensible Fraud at an Election Changing level, many times more votes than is needed. The Fake News Media refuses to write the facts, thereby being complicit in the Crime of the Century. They are so dishonest, but Patriots know the truth!” The 45th President added, “Arizona must immediately decertify their 2020 Presidential Election Results.” (READ MORE: Maricopa County Audit Reveals Thousands of Discrepancies with Ballot Forms, Serious Integrity Issues) 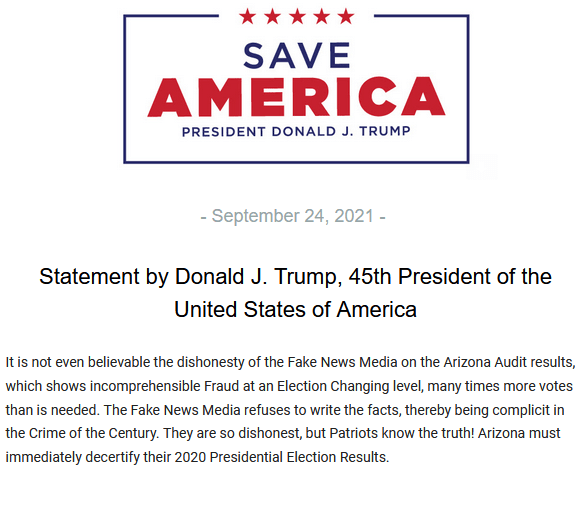 Arizona state Sen. Wendy Rogers has previously called for the results to be decertified in anticipation of the audit results. Last month, Rogers began gathering signatures calling for the Arizona legislature to begin the process of decertification, and ultimately secured over 1 million signatures prior to the hearing earlier today.

WE DID IT! The petition to #Decertify the Presidential Election has reached 1,011,873 signatures. We reached our goal THE DAY the #AZAudit is going to be released. Amazing work patriots. Our job is just getting started. #AuditAll50States #Decertify2020 https://t.co/VgClJjWTwn

Today she echoed her previous call to action on Twitter, and several Republican and  with one former Trump official writing, “The number of illegal ballots found in Maricopa County alone is over 4 times the current amount separating President Trump and Joe Biden in Arizona as a whole.” He added, “Should have never been certified.”