by Cullen McCue
in 2022, Politics, The Hill, The Swamp

President Trump enthusiastically endorsed GOP House leader Kevin McCarthy (R-CA) despite his efforts to convince the former president to resign. McCarthy privately told a number of individuals that he would pressure Trump to resign in the days following the January 6 protests.

“In Congress, Kevin is a tireless advocate for the people of Bakersfield and the Central Valley. He is working incredibly hard to Stop Inflation, Deliver Water Solutions, and Hold Joe Biden and Nancy Pelosi Accountable for their catastrophic failures and dereliction of duty,” Trump wrote in a statement.

“Kevin McCarthy has my Complete and Total Endorsement,” the former president added.

The move has puzzled a significant portion of the conservative base after a leaked phone call between McCarthy and U.S. Rep. Liz Cheney made headlines earlier this year.

During a January 10, 2021 phone call, Cheney inquired about the prospect of Trump resigning from office. McCarthy said it was not likely that Trump would resign in the event of an impeachment over the January 6 protest in Washington, D.C., adding that he was urging him to do so.

“Again, the only discussion I would have with him is that I think this (impeachment) will pass, and it would be my recommendation you should resign,” McCarthy said in reference to an upcoming phone call at the time.

"In a phone call reported today by the NYT, Congressman Kevin McCarthy told his close friend Liz Cheney that he hoped the social media companies would censor MORE Conservative Republicans in Congress." pic.twitter.com/HRQMzaVva5

McCarthy has also mirrored leftist rhetoric on Trump supporters and the January 6 Capitol protests, which he blamed on “pro-Trump extremists.”

The endorsement has not gone over well with a number of Trump’s loyal supporters, who believe McCarthy cannot be trusted.

“Trump endorsing Frank Luntz bunk buddy Kevin McCarthy, instead of using his political capital to undermine bad GOP leadership, is a sign that Trump has not learned much after all this time about who is and is not America First,” wrote Pedro Gonzalez of Chronicles Magazine.

Despite clear objections from his base, Trump and McCarthy reportedly spoke on the phone shortly after the Cheney phone call leaked. The former president claims McCarthy never followed through with his pledge to Cheney, which Trump took as “a compliment.” 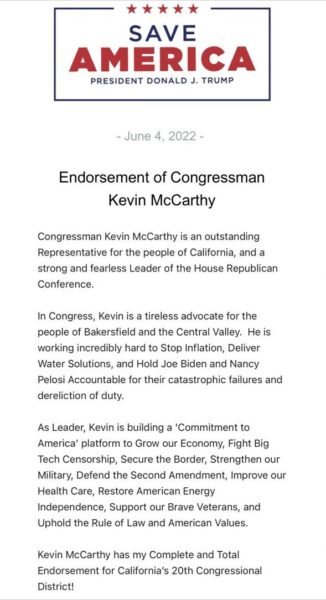