Titania McGrath, the SJW parody account, was suspended by Twitter for 7 days for pretending to insult the creator of her fellow SJW, Godfrey Elfwick.

McGrath is the creation of British comedian and Shakespeare scholar, Andrew Doyle, in order to parody the insanities of the modern social justice left. Most of her tweets are spent attacking straight white men – given how nuts many on the left are today, it’s almost indistinguishable from the real thing!

Men who are attracted to women clearly have feminine tastes and are therefore probably gay.

Any young woman who chooses to wear a skirt is reinforcing gender stereotypes and is therefore a transphobe.

A transwoman in a dress, high-heels, make-up and a padded bra, however, is empowering af. https://t.co/N4Zh2gKgPV

I can’t help but think that all this criticism of Robert Mugabe is just another attempt to demonise people of colour.

It seems that Twitter also cannot tell parody from reality, as McGrath was suspended for pretending to insult Lisa Graves, the creator of the widely-missed parody account, Godfrey Elfwick. She labelled Graves a “vile and grotesque excuse for a human being, a seeping pustule of bigotry who deserves to be ostracised, thrown into a gutter and spat on repeatedly until she learns the value of basic human compassion.” 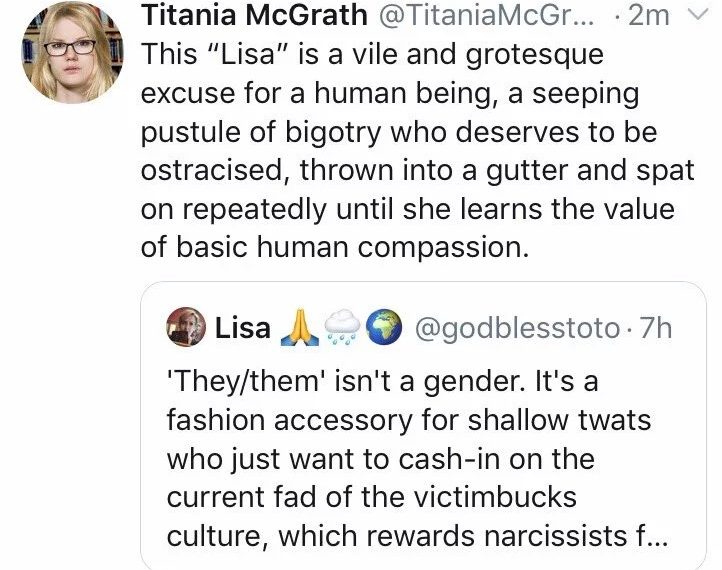 McGrath issued a statement via fellow parody account, Jarvis Dupont. “The fascists at Twitter have suspended my accounty for 7 days for the crime of resisting hate and fighting for social justice,” McGrath wrote. “Like Nelson Mandela, I have been silenced for speaking truth to power.” Twitter’s censorship of her should be “classified as a form of intellectual genocide,” she argued. You can read her statement in full below:

Supporters have begun imploring Twitter to undo their actions with the hashtag #FreeTitania.

What the hell?? This is a hate crime!! @TitaniaMcGrath is a leader in the battle against all things bad in the world!! She was inches away from converting me into a vegan, black, hispanic, non binary revolutionist. Well not anymore! This is you fault, @twitter#freetitania https://t.co/AlX75aM9hj

I can’t believe that @TitaniaMcGrath, liberator of penguins and all penguin kind, has been suspended from twitter. Oh, the humanity. #FreeTitania https://t.co/BiL4PSmoJb

Of all parody accounts to suspend, @TitaniaMcGrath … really @Twitter !

Christ almighty this shithole has become ground zero for the Identity asylum.

McGrath’s suspension is yet another example of Twitter cracking down on anyone who dares to mock the left, while at the same time, letting verified users run rampant with hatred and violent threats against white people, conservatives, and anyone deemed to be a threat to the globalist ideology. Googling “verified hate,” returns many, many examples of violence threats that are unchecked by Twitter. Some examples are posted below. 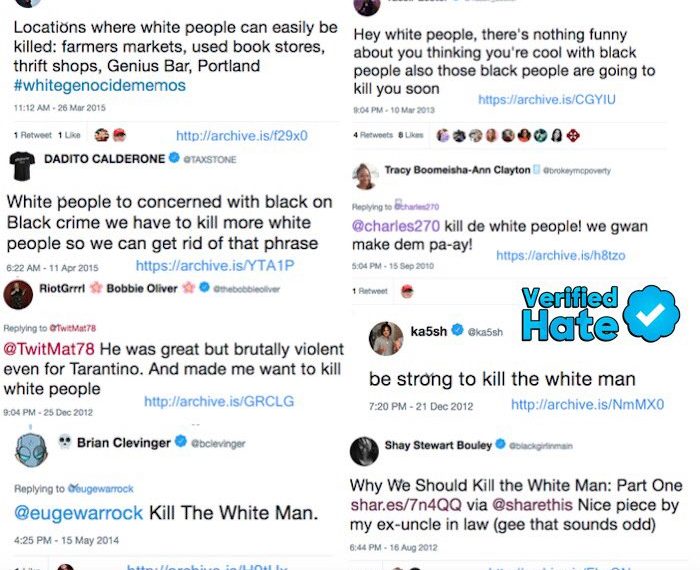 Conservative satirical accounts and sites have not fared well across social media in general either. The Christian satire website, Babylon Bee, was fact-checked by Snopes on Facebook as “labelled satire,” potentially throttling their reach. The suspension of Titania McGrath is simply another nail in the coffin of any comedy that is not politically correct.