Authorities have released the name of the man arrested in Winnipeg, Canada for mowing down four Freedom Convoy demonstrators in his Jeep Patriot SUV, revealing that David Zegarac, an Antifa member and accused pedophile, faces 11 charges related to the left-wing terorrist attack that police and media are still portraying as a mere “hit and run” accident.

David Zegarac, a 42-year-old Canadian deeply tied to left-wing politics and accused of pedophilia, was caught on camera wearing a COVID mask as he swerved his white Jeep Patriot into a crowd of Freedom Convoy demonstrators gathered outside of legislative buildings in Winnipeg, the capital of Canada’s Manitoba Province. Though he immediately fled the scene, Zegarac was arrested roughly an hour later after a brief struggle with police, who have hit the devout left-winger with a total of 11 charges. Alongside corporate media outlets, police have refused to call Zegarac a terrorist, and have failed to charge him with any hate or terror-related crimes, instead publicly portraying the attack as a mere hit and run accident.

Despite efforts by police and corporate media to downplay the severity of Friday night’s attack, internet sleuths have exposed David Zegarac, who remains in police custody, as a left-wing extremist with ties to Antifa terror groups. Zegarac is a longtime fixture in Winnipeg’s so-called “hardcore” music scene, often promoting communism and other radical left-wing ideals through his music, but was dropped by his record label after numerous women and children accused him of rape.

A Wikipedia page profiling Zegarac’s music career exposes a side of him police and corporate media have sought to cover-up, naming him as a vegan and longtime “anti-racism activist,” though the page appears to have been edited following the attack in an apparent effort to obscure his motives from the public eye. According to the unedited version of the Wikipedia profile, Zegarac serves as the frontman of several left-wing bands, including The Brat Attack, The Dead Peasants Revolt, the Black Mask Brigade, and Class War Kids. All of the aforementioned bands are left-wing in character and perform openly left-wing music, often employing anti-white and anti-Christian song lyrics while calling for violence.

“This is class war, you rich white f*cks,” says another song performed by Zegarac, who was adopted by white parents, but claims to be of mixed European and Indigenous descent. “Ruling class is sh*t out of luck. Your god is f*king dead, I shot him in the head,” continues the song.

Regardless of his many musical acts, Zegarac’s unedited Wikipedia page also states that in 2015, “Rebel Time Records announced that it would no longer be carrying releases by the Brat Attack or the Class War Kids due to mounting allegations of sexual assault directed at Zegarac.” Among his sex crime accusers is a woman who was just 13-years-old when she says the left-wing musician turned Jeep-driving terrorist groomed and raped her.

Zegarac is also reported to be a registered member of the website Deviant Art, posting left-wing creations under the handle of “DaveyBrat.” Among the low-level works of art he has posted to the website are an image of a man cloaked in black bloc garb while hurling a molotav cocktail, and another of a man wearing emblazoned with left-wing identifiers as he burns symbols of Christianity and American capitalism.

A viral Facebook post which has been repeatedly removed by big tech moderators purports to expose the depths of Zegarac’s far-left activism, and calls out Canadian authorities and media for refusing to reveal the truth surrounding David Zegarac and the Winnipeg attack. According to the post, Zegarac’s bands are directly linked to Antifa and possibly the “Canadian Anti-Hate Network,” a nonprofit group formed by left-wing journalists and community leaders which has been accused of providing funding to left-wing militants and has been publicly embraced by Canadian politicians and media members.

“David Zegarac was an active member of Antifa and other ‘hate related organizations,'” the post claims. “He had organized many events for these organizations. He played in a band, The Brat Attack, as well as several other. All of these projects were members of far-left extremist organizations,” it continues.

“Let me repeat that again: A member who strongly believes in the values which are held by far-left-extremist organizations attacked peaceful protestors in Winnipeg MB Canada on February 4th with the vehicle he was driving.” 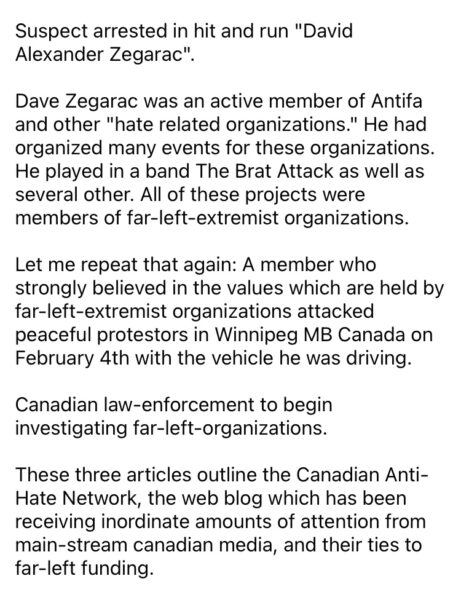 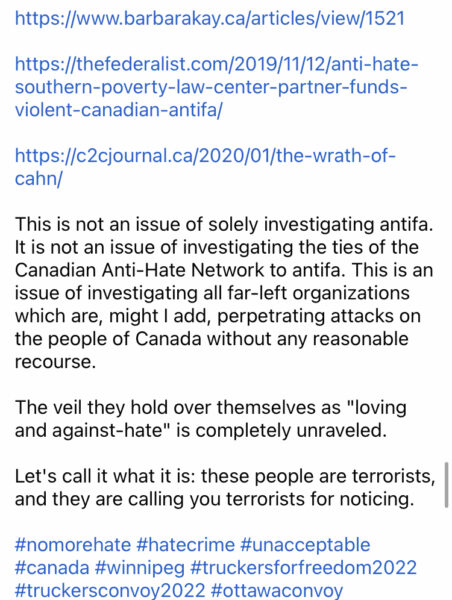