"Barr was being pushed to tell lies about the election by Mitch McConnell," wrote President Trump.

In the statement, President Trump said former Attorney General Bill Barr “failed to investigate election fraud, and really let down the American people,” citing the “scam in took place in Georgia” where Ruby Freeman, Shaye Moss and their accomplices were captured on camera counting what appeared to be thousands of ballots after observers were told to leave. “He couldn’t see what was wrong with it,” continued President Trump. “Just like he failed to understand the Horowitz report and let everyone down with respect to getting a timely investigation (where’s Durham?) on all of the corruption of the Obama-Biden administration.”

President Trump said that Barr and other RINO’s in the Republican Party allow the “crazed Radical Left to succeed,” adding that they are being “used in order to try and convince people that the election was legitimate” despite increasing evidence of voter fraud in the 2020 Presidential election which shows “conclusively that it wasn’t.”

“He came in a semi-bang and went out with a whimper,” wrote President Trump, who pointed out that Barr had previously warned of mail-in voter fraud on CNN with Wolf Blitzer earlier in his term, yet “did nothing about it.”

“If there was no fraud, why are Arizona, Georgia, Wisconsin, Pennsylvania, and other States spending so much time and effort exposing the fraud?” President Trump continued before listing off evidence of voter fraud that has now been uncovered in multiple states. 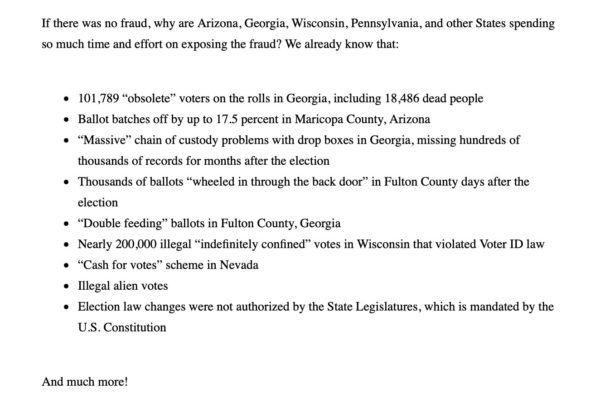 President Trump questioned sincerity of the final letter Barr had written to him before leaving office, and revealed that Senator Mitch McConnell had been pushing Barr to “tell lies about the election” because he was concerned that it would damage Republican efforts during the runoff election in Georgia, which Republicans had ultimately lost anyways. “What really damaged the Senate Republicans was allowing their races to be rigged and stolen, and worse, the American people no longer believe their vote matters because spineless RINOs like Bill Barr and Mitch McConnell did nothing,” President Trump added.

“Bill Barr was a disappointment in every sense of the word,” said President Trump. “Instead of doing his job, he did the opposite and told people within the Justice Department not to investigate the election. Just like he did with the Mueller report and the cover up of CROOKED HILLARY and RUSSIA RUSSIA RUSSIA, they don’t want to investigate the real facts. Bill Barr’s weakness helped facilitate the cover up of the Crime of the Century, the Rigged 2020 Presidential Election!”