by Ben Bailey
in Coronavirus, News

Senate Republicans, led by Senator Mike Lee (R-UT), have introduced a bill that would allow victims of adverse effects to the COVID-19 vaccine to seek monetary compensation. Lee’s bill would create the “Countermeasure Injury Compensation Fund Amendment Act” as well as the COVID-19 Vaccine Commission. The vaccine injury bill would change the existing Countermeasure Injury Compensation Act (CICP), which was created for the purpose of compensating those who suffered injury or death due to government countermeasures to public health crises.

Despite its supposed intention, none of the over 7,000 claims filed under the CICP involving COVID-19 vaccine injuries have resulted in compensation. Because of the liability protections afforded to the pharmaceutical companies, these cases have been largely ignored. Senator Lee, along with co-sponsoring Senators Mike Braun (R-IN), Ron Johnson (R-WI), as well as Cindy Hyde-Smith (R-MS), are looking to make it easier for those affected to hold the pharmaceutical industry accountable.

In a press release, Sen. Lee stated that his Countermeasure Injury Compensation Amendment Act will “help build trust in future medical treatments and to make sure those who were harmed are properly compensated.” 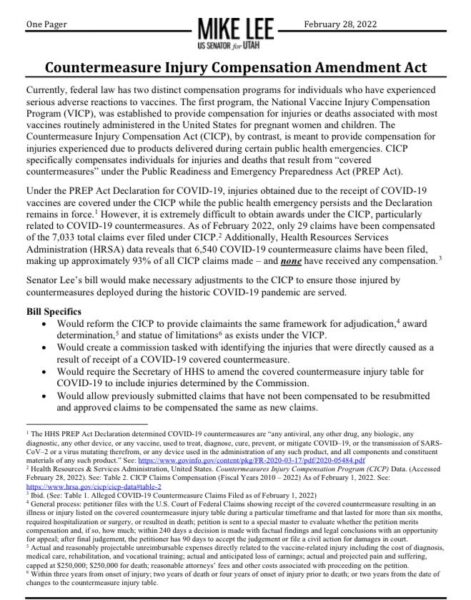 Since the vaccines were made available in early 2021, the prevalence of negative side effects has been rarely discussed by mainstream media outlets. Social media outlets have also played a large part in silencing vaccine injury discussion, with Twitter, Facebook and other platforms banning hundreds for “vaccine disinformation” over the last year. Since the beginning of the pandemic, 93.5% of the claims made under the CICP were for people alleging COVID-19 vaccine related injuries and deaths.

Currently, the three pharmaceutical companies who have produced the COVID-19 shots — Johnson & Johnson, Moderna, and Pfizer/Bio-NTECH — are protected from liability under the Public Readiness and Emergency Preparedness (PREP) Act.

A prominent example of this is the story of Las Vegas teen Emma Burkey, who is relearning how to walk after enduring adverse effects from the Johnson & Johnson vaccine. Burkey’s family has had to cover significant medical expenses with only the help of medical insurance. An attempt by the family to seek damages resulted in a lawyer dropping their case. The family has since sold their house and moved into a wheelchair-accessible apartment.

Burkey’s story and others like it were the driving force behind Lee’s bill. In the event that someone experiences health problems as a result of the COVID-19 vaccine, they would have recourse to obtain compensation.

Several weeks ago, a similar initiative was introduced by some House Republicans. The bill proposed by Rep. Diana Harshbarger (R-TN) would allow people who suffered injuries from COVID-19 vaccines to sue the federal government. “The Left forced Americans into medical procedures against their will and simultaneously restricted their right to sue for injuries. It’s unacceptable. If vaccine mandates are ethical, why do they require a legal carveout”? said Rep. Jim Banks (R-IN), who co-sponsored the house vaccine injury bill.

Protection from liability for pharmaceutical companies has been a heated point of contention since the vaccines were introduced.