by Cullen McCue
in Education, LGBTQ

A school nurse in Connecticut was fired after revealing that teachers were secretly giving “gender confused” preteen students puberty blockers behind their parents’ backs. Kathleen Cataford, 77, was suspended by the Hartford School District after going public with the information on social media.

The nurse has been suspended and later fired over a Facebook post which revealed that an 11-year-old at the school where she worked was on puberty blockers. Kathleen Cataford was suspended and eventually fired after her actions were deemed “transphobic.”

“Investigate the school system curriculum…CT is a very socially liberal, gender confused state,” the axed school nurse wrote in a Facebook group. “As a public school nurse, I have an 11yo female student on puberty blockers and a dozen identifying as non-binary, all but two keeping this as a secret from their parents with the help of teachers, SSW [social workers] and school administration,” she continued. “Teachers and SSW are spending 37.5 hours a week influencing our children, not necessarily teaching our children what YOU think is being taught.”

Cataford went on to claim that Hartford students were being introduced to transgender content as early as Kindergarten.

The post came to the attention of Hartford School District Officials after the mother of the 11-year-old mentioned saw it and flagged it to school officials, the Daily Mail reports. Hartford Public Schools Superintendent Dr. Leslie Torres-Rodriguez issued a statement condemning Cataford’s remarks, but did not name the school nurse.

“Hartford Public Schools strives to provide an inclusive environment where all students feel seen, valued, respected, and heard,” the statement read. ‘We as a school district are responsible for the health, well-being, social and emotional development, and safety of ALL of the children entrusted to our care.” 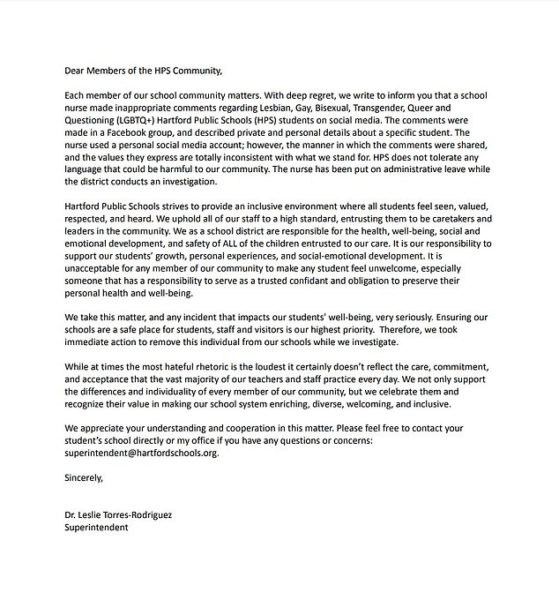