REVEALED: Texas Republicans Decided Not To Winterize Power Grid Because Of Global Warming

REVEALED: Texas Republicans Decided Not To Winterize Power Grid Because Of Global Warming

Texas Republicans believed a global warming report that claimed Texas would be 1.6 degrees warmer on average, and thus, did not winterize the grid.

Texas Establishment Republicans blew off calls to address power grid vulnerabilities, and power providers didn’t do safety inspections because they were afraid of contracting COVID-19. Now, new information has come to light that the decision not to legally require power plants to winterize was based on reports given to the Texas legislature suggesting global warming was happening to such an extent that winterizing the system was unnecessary.

Democrat Texas Representative Michelle Beckley [D-HD65] highlighted a vote on Twitter she says would have required power plants to winterize their systems in order to actually prepare for winters, including the recent winter weather the crippled the Texas power grid and left millions of Texans without power or water.

5 years ago HB2571 was killed on the house floor on 3rd reading by my predecessor. It mandated power plants maintain and PREPARE for weather like this. Introduced by Eric Johnson when he was a state rep. MOST REPUBS voted AGAINST this bill. Here are their votes #txlege pic.twitter.com/bGzfCK2zas

The Republican who previously held the seat in House District 65, Ron Simmons, jumped in to imply the legislature based the decision not to mandate preparing for winter on a report suggesting that so much global warming was happening that the winterizing the systems would not necessary.

“Also the State Climatologist report is here and you can see it predicts a reduction in winter weather through 2036 and says we will be 1.6 degrees warmer than in 2000-2018,” wrote Simmons. “How does he or she know?”

Also the State Climatologist report is here and you can see it predicts a reduction in winter weather through 2036 and says we will be 1.6 degrees warmer than in 2000-2018 (how does he or she know?) https://t.co/PWUCqf1MIw. #txlege

The report states that winters in the near future were expected to be “about 5.6°F warmer than the 1950-1999 average” and that a “decrease was expected” in winter weather.

But in reality this was not the case, as evidenced by weather reports and winter storm warnings from earlier this month: 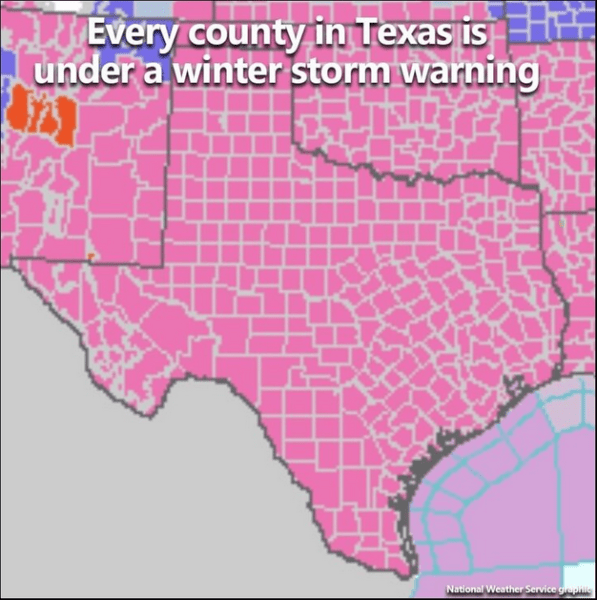 Numerous sources have also been covering what appears to be a federal mandate from the Biden regime that prevented Texas power companies from meeting the electricity demand necessitated by the severe winter weather.