'I am a researcher with CTA'

Parents who stand up to public school Coronavirus tyranny have faced demonization and targeting from the media and political establishment in the United States of America. Now, a report shows that a teachers union operative in California was trying to find opposition research on parents who simply wanted the punishing lockdowns and persecution of the children to end.

Reopen California Schools, which fights against Coronavirus tyranny, dropped the following email that Ann Swinburn sent to parents trying to get information on the anti-tyranny movement. The email was reported on by the Daily Mail. Ann Swinburn identified herself as a researcher for the California Teachers Association.

Swinburn wrote: “I am a researcher with CTA and am currently doing some research into the various “reopen” groups around the state. York Chang gave me your contact information and said you all have lots of information regarding the Parent Association. I am wondering if we could set up a time to chat in the next few days?” 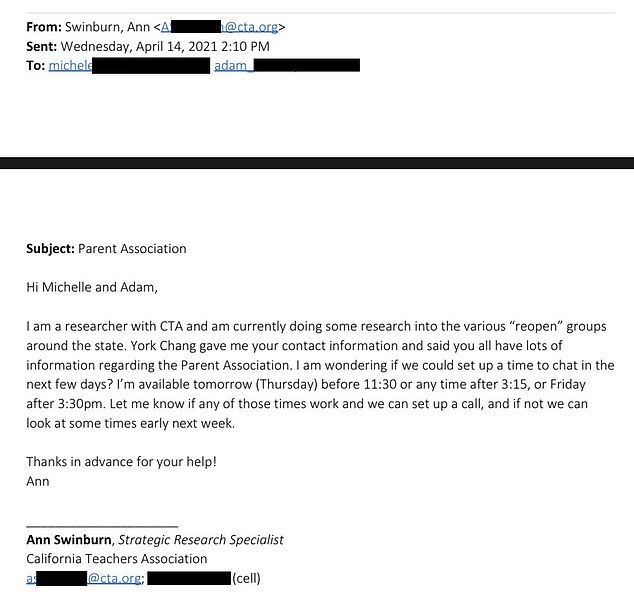 Records show that Ann Swinburn has identified herself as a “Strategic Research Specialist” for the California Teachers Association. 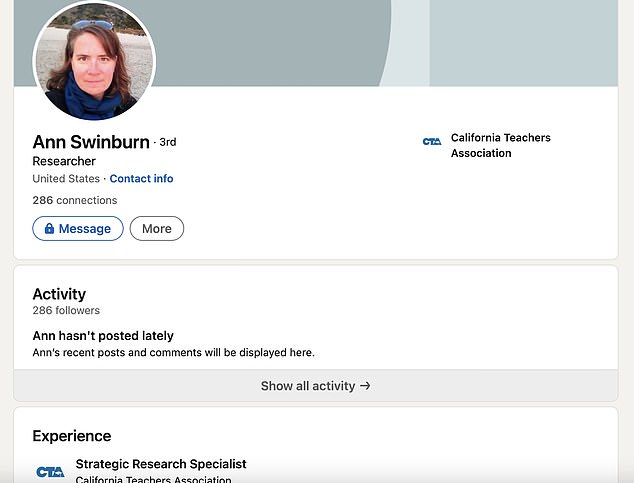 Parents have become emboldened to protest the powers that be, ever since it became clear that the persecution of children during the Coronavirus Age is destroying lives and children’s morale. Clearly, the parent movement scared the globalist despots in power.

In April 2021, the same month that Swinburn was mining for opposition research in California, I reported on parents peacefully protesting in Arizona. NATIONAL FILE reported: Parents in Vail, Arizona staged a peaceful protest against their school board, railing against the board’s mask mandate for children in the school system. The Face Freedom protesters then convened a vote to elect new school board members, though the mainstream media is trying not to recognize the authority of that citizen vote. This Tucson-area protest could set a precedent for other parents across the nation who are trying to un-mask their children against the deranged whims of government authoritarians.

The righteous parents protested inside an event at the Vail Unified School District school board Tuesday. That school board is keeping its mask mandate for children despite the fact that there is no longer a statewide order compelling them to do so. The outraged parents got their message across. The school board cancelled their meeting that night. The protesters elected an alternate school board, which then dismissed the mask mandate. However, the mainstream media is claiming that the new school board is “unofficial.” Pima County sheriffs’ deputies descended on the scene but the parents would not be intimidated. One of the protesters pressed the officials on “open meeting law” after the school board chose not to hold the meeting.

100s of parents in Vail, AZ attended a School Board meeting, protesting mask mandates for schools. They would not leave. The Board was overwhelmed and outnumbered. They quit. The parents elected new members and immediately struck down mask mandates for kids. This is the way. pic.twitter.com/Om83FnURWE

Emotions quite high.. Parents demanding answers from the sheriff's deputy as to why the school board left. The deputy trying to explain the meeting is canceled for tonight. @KVOA pic.twitter.com/nutYVKkShM

This scene represents the growing momentum of the Face Freedom movement, which recently staged a “Million Maskless March” in Fort Lauderdale, Florida. The organizer of that protest, Chris Nelson, is running for Broward County Commissioner. Nelson staged the mega-viral anti-mask “flash mob” at Target, which gave new life to the 1980’s anthem “We’re Not Gonna Take It” by Twisted Sister, whose singer Dee Snider disappointingly attacked the Face Freedom protesters for using his song.

Even a recent CDC report totally destroyed the case for mask mandates. As NATIONAL FILE reported: The CDC claims that between March 1 and December 31 of 2020 the mask mandates, which were executed in the vast majority of United States counties, stopped COVID case growth rates by one half of one percent after 20 days and by less than 2 percent after 100 days.