Tickets for PoC were $15, whereas tickets for whites were $22

A theatre in New York City attempted to charge white people 47% more for a ticket to a play about Thomas Jefferson, but backtracked following media reports.

A small theatre in Brooklyn, New York, simply called Jack, is set to put on a production of the play “TJ Loves Sally 4 Ever,” a play based around the relationship between Thomas Jefferson and his slave Sally Hemings (the mother to some of his children), but transported to the setting of a university in Virginia in the 21st Century.

“TJ Loves Sally 4 Ever is a play that centers Black voices, and it is our goal to have as diverse an audience as possible – a true representation of the borough that JACK calls home,” the theatre writes on its website. Initially, they decided that the best way to help “black voices” would be to charge white people $22 for a general ticket, and only $15 for people who “identify” as PoC. “This unique ticketing model for TJ Loves Sally 4 Ever prioritises access for People of Colour,” the site read. 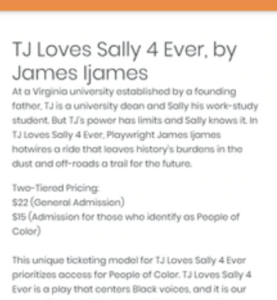 The New York Daily News editorial team were not impressed with their “clearly illegal scheme”:

This is plainly discrimination based on race that must be stamped out forthwith by city investigators… Leadership at Jack says that the pricing is based not on how someone looks, but the ethnicity with which they identify. Clearly the point being made is that black Americans have suffered over the generations from chattel slavery, Jim Crow and all manner of other racist abuses. In that context, a seven-dollar difference feels like a small private gesture toward something more sweeping and systemic, like reparations delivered by the government. But the city’s economy is not a thought experiment. It is a place where small injustices ignored can quickly become troubling precedent.

After facing a backlash about their potentially rather illegal ticket pricings, the New York theatre quickly changed its tune. The ticketing prices are now “suggested and self-identified,” rather than mandatory:

We encourage People of Color (PoC) to select the Discounted Admission price, and our non-PoC friends and allies to pay the standard general admission to participate in this gesture of awareness, as well as contribute to our ongoing effort to offset the cost of subsidized tickets for PoC youth groups and Community Organizations.