Redditors Go Viral For Admitting To Having No Internal Monologue, Thinking Like NPCs

A thread on the r/NoStupidQuestions subreddit has gone viral because of its link to the popular, albeit heavily politicized, NPC meme.

The NPC meme in its original form references people who have no internal monologue, and go through life performing a pre-scripted list of tasks and opinions, much like a non-player character in a video game.

Over the weekend Reddit user u/Vadermaulkylo posted, “Today, I told my mom that I have no internal monologue and she stared at me like I have three heads. Is having one common?”

“I sincerely thought it was a fictional concept that ‘Dexter’ made up. It shocks me beyond belief to know that people may have one,” the Redditor said. “How do you do it? I can’t imagine doing that.”

When the OP was asked whether they had truly never mulled over something in their head, they responded, “No not really. I never really talk in my head, ideas just kinda come I guess.”

“So if your boss asks you to do something right at the point you were planning to leave work you don’t think ‘oh f**king s**t balls what a pain? in your head while saying ‘No problem at all boss.’ out loud?” another user asked.

“No. Never had that,” u/Vadermaulkylo responded. “If I’m asked to do something I don’t wanna do, I just get kinda frustrated but that’s about it. I don’t really think to myself.”

The post was met with a mixed response, with some Redditors in disbelief at the OP’s admission of no internal monologue, while many more  concurred with his view that thinking about things is strange.

Another user chimed in, “It’s also very confusing as someone who doesn’t have one. I feel like the best way I have to describe it is that I have ‘normal thoughts’ and ‘word thoughts’ neither really have a voice to them, they just happen.”

“Me too. Like do people just go around narrating their lives like Bridget Jones? Or that kid from the Wonder Years?” a third user queried. 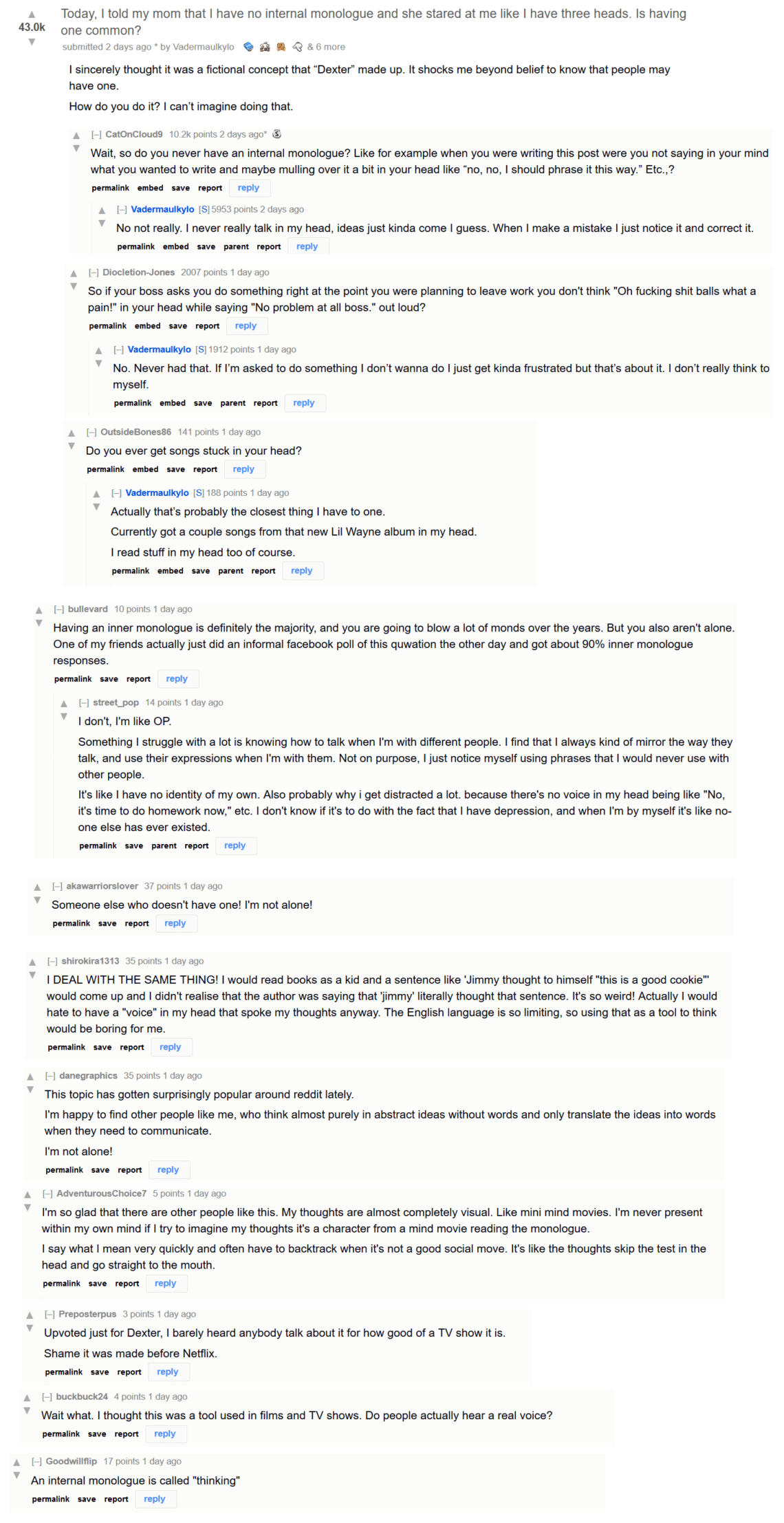 One user summed up the thread succinctly: “It’s like I have no mind of my own.”

The recent fascination with the subject of internal monologues can be largely attributed to psychology articles examining “the people with no voice in their head,” but also to the websites that frequently have their original content stolen by monologue-deficient Redditors.

It’s is unclear whether Reddit serves as an accurate microcosm for the rest of modern society’s lack of internal monologue or not, but one thing is certain: Reddit is rife with non-player characters.

‘Riot Control Simulator’ Game Will Let You Suppress Riots ‘At All Costs’ With Water Cannons, Tanks