The tech CEO had his account taken over by a hacker who posted seemingly random racist messages.

Twitter CEO Jack Dorsey is known for his soft-spoken liberal politics, which is why a series of offensive posts tweeted out by his official account Friday were a sign of something wrong. 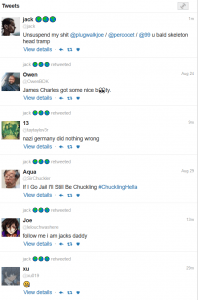 The hack was eventually noticed by Twitter staff, who took action to reclaim the account and delete the offending tweets, but not before another troll message declaring “Hitler is innocent” was sent out to Dorsey’s 4.21 million followers. 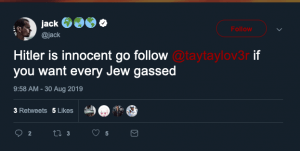 The official account for the Twitter communications team released a statement about the hack: “We’re aware that @jack was compromised and investigating what happened [sic].”

Many users who are frustrated with Twitter’s arbitrary rule enforcement and account suspensions replied to @TwitterComms with sarcastic comments.

you should ban him and make him appeal via email, then take a couple days to process it. why give him special treatment

Twitter was the first platform to start purging conservative figures such as Milo Yiannopoulos in 2016, and came under heavy scrutiny as recently as March of this year, when investigative journalist Tim Pool grilled Twitter brass over tech censorship on the Joe Rogan Experience podcast.