National File ranks the best 22 tweets from President Donald Trump from 2009 through 2019.

President Donald J. Trump has posted more than 47,000 tweets since he joined Twitter in 2009.

Though the President’s Twitter game has slowed down considerably since the days of McDonald’s-fueled frenetic late-night Twitter binges on the 2016 campaign trail, his ability to condense amusing quips and anecdotes into 140 characters or less has left the internet with a veritable treasure trove of platinum-tier sh*tposts.

National File set out to assemble a compendium of the best and most relevant tweets of the decade, without using a restrictive “top 10” numbered format.

The tweets are ranked below:

People are proud to be saying Merry Christmas again. I am proud to have led the charge against the assault of our cherished and beautiful phrase. MERRY CHRISTMAS!!!!!

21. No Mercy To Terrorists

NO MERCY TO TERRORISTS you dumb bastards!

So ridiculous. Greta must work on her Anger Management problem, then go to a good old fashioned movie with a friend! Chill Greta, Chill! https://t.co/M8ZtS8okzE

19. My Button Is Much Bigger

North Korean Leader Kim Jong Un just stated that the “Nuclear Button is on his desk at all times.” Will someone from his depleted and food starved regime please inform him that I too have a Nuclear Button, but it is a much bigger & more powerful one than his, and my Button works!

18. Joe Biden Would Go Down Fast And Hard, Crying All The Way

Crazy Joe Biden is trying to act like a tough guy. Actually, he is weak, both mentally and physically, and yet he threatens me, for the second time, with physical assault. He doesn’t know me, but he would go down fast and hard, crying all the way. Don’t threaten people Joe!

….Actually, throughout my life, my two greatest assets have been mental stability and being, like, really smart. Crooked Hillary Clinton also played these cards very hard and, as everyone knows, went down in flames. I went from VERY successful businessman, to top T.V. Star…..

Jesus, Trump really did tweet a lot about the late Mac Miller, didn’t he https://t.co/EYzhVuMWGw pic.twitter.com/xwkQwylBTX

Deals are my art form. Other people paint beautifully or write poetry. I like making deals, preferably big deals. That's how I get my kicks.

I refuse to call Megyn Kelly a bimbo, because that would not be politically correct. Instead I will only call her a lightweight reporter!

.@cher–I don’t wear a “rug”—it’s mine. And I promise not to talk about your massive plastic surgeries that didn’t work.

While @BetteMidler is an extremely unattractive woman, I refuse to say that because I always insist on being politically correct.

If the morons who killed all of those people at Charlie Hebdo would have just waited, the magazine would have folded – no money, no success!

…to Mar-a-Lago 3 nights in a row around New Year's Eve, and insisted on joining me. She was bleeding badly from a face-lift. I said no!

.@ariannahuff is unattractive both inside and out. I fully understand why her former husband left her for a man- he made a good decision.

Sorry losers and haters, but my I.Q. is one of the highest -and you all know it! Please don't feel so stupid or insecure,it's not your fault

6. Despite the constant negative press covfefe 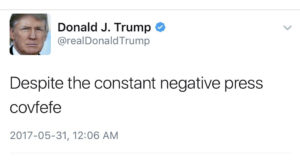 5. Chidlren Are Being Grabbed By The Perverts

Got to do something about these missing chidlren grabbed by the perverts. Too many incidents–fast trial, death penalty.

4. Kim Jong-un Is Short And Fat

Why would Kim Jong-un insult me by calling me "old," when I would NEVER call him "short and fat?" Oh well, I try so hard to be his friend – and maybe someday that will happen!

Healthy young child goes to doctor, gets pumped with massive shot of many vaccines, doesn't feel good and changes – AUTISM. Many such cases!

2. I Have Never Seen A Thin Person Drinking Diet Coke

I have never seen a thin person drinking Diet Coke.

Every time I speak of the haters and losers I do so with great love and affection. They cannot help the fact that they were born fucked up!

BIDEN: Kamala Is ‘Ready To Be President Day One If Somebody Pushed Me Off A Roof, Or Something’