CPAC attendees must carry their papers and wear face masks at all times.

National File has obtained a document from the Hyatt Regency in Orlando, Florida, where CPAC is being held this year after leaving the Washington, D.C. area to allegedly escape lockdowns and mask mandates. The document explains that attendees are expected to wear their masks and carry their hotel key or registered credentials at all times to avoid being canceled by the “America Uncanceled” conservative meetup.

“At this time, we wanted to share some important information related to hotel access this weekend,” the document begins. “From 7:00 a.m. on Saturday, February 27 until 7:00 a.m. Monday, March 1, access into the Hyatt Regency Orlando will be restricted for the following:”

The document then explains that “registered hotel guests” and “credentialed CPAC attendees and media” are the only individuals that will be allowed into the hotel, including restaurants and bars.

“During this time, registered hotel guests and credentialed CPAC attendees and media will be required to show a hotel key or event credentials to gain access into the hotel,” the document declares.

“As noted in the CPAC 2021 Code of Conduct, developed by CPAC organizers, all CPAC attendees are required to wear face coverings in all indoor and outdoor public areas of the hotel,” the hotel demands, noting it is working in conjunction with Matt Schlapp’s American Conservative Union, the organization behind CPAC. 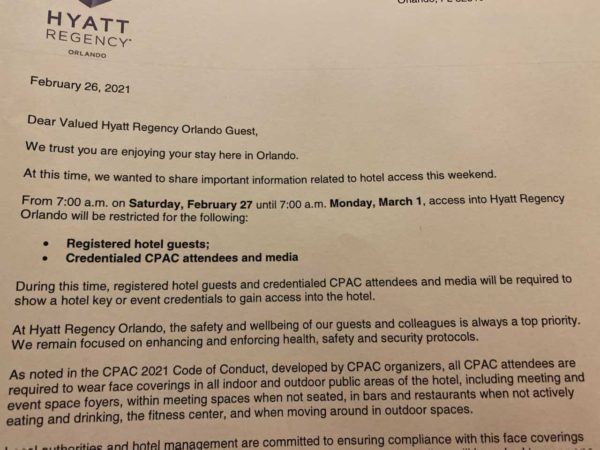 “Including meeting and event space foyers, within meeting spaces when not seated, in bars and restaurants when not actively eating and drinking, the fitness center, and when moving around in outdoor spaces.”

“Local authorities and hotel management are committed to ensuring compliance” when it comes to face coverings, the document notes.

This comes as multiple high profile CPAC attendees, including influencers Rogan O’Handley and Austen “Fleccas” Fletcher have been kicked out of the event for refusing to comply with the organization’s mask mandate. National File reported:

“I was politely removed from #CPAC for not wearing a mask,” Fletcher announced on Twitter. “They forced one on me for 30 seconds but then I ran into some fans and couldn’t look them in the eye while wearing it. That’s it. That’s just me. I’m out.”

In video footage of the incident, at least five men can be seen surrounding Fletcher, including an armed man in uniform who appears to be a police officer. Fletcher is told that the is “no longer wanted” at CPAC, and that if he reenters the hotel he will be “arrested for trespassing.”

“I was just ejected from @CPAC and threatened with immediate arrest if I return for pulling my mask down to take pictures with dozens of followers,’ O’Handley wrote. “@Hyatt security had multiple police detain me Selfies with fans not allowed at CPAC!”

While some expressed doubt that CPAC would truly enforce the byzantine mask mandates, temperature check requirements, and mandatory COVID tests for entry, it appears the conservative organization is totally bending to the demands of Democrats in Orlando.