The founder of Extinction Rebellion admits in a blog that the group's aim is to end the "toxic system" of the West.

The co-founder of the radical climate change movement Extinction Rebellion (XR) has confessed that his crusade isn’t about climate but about ending the “toxic system” of Western civilisation.

Stuart Basden, who founded XR in 2018 with 14 climate activists, has admitted that humans as a species may not survive and nothing can be done to fix the environmental crisis.

“Indeed, we won’t fix it,” he writes on Medium, a popular blogging site. “After a certain point, it’s inevitable. And that’s where we stand now, with regards to the momentum of climatic change,” he categorically states.

So what motivates XR and what is their goal if climate change cannot be halted?

“XR isn’t about the climate.” The climate emergency is a “symptom of a toxic system” that has “infected the ways we relate to each other as humans and to all life,” Basden explains. 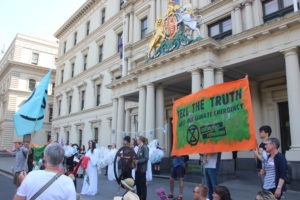 Basden locates the problem in European ‘civilisation’ which he claims was spread around the world through the cruelty and violence of colonialism.

Blaming the Bible for “a multi-continent-wide genocide of tens of millions of people,” the climate crusader argues that European-Christian “cultural myths justified the horrors, such as the idea that indigenous people were animals (not humans), and therefore God had given us dominion over them.”

He also castigates science for distinguishing between living being and “‘dead’ matter — just sitting there waiting for us to exploit it and use it up.”

The British Empire had an enormous hand in this exploitation as can be seen from the dominance of the English language throughout the globe, he adds.

We need to cure the causes of the infection, not just alleviate the symptoms. To focus on the climate’s breakdown (the symptom) without focusing attention on these toxic delusions (the causes) is a form of denialism. Worse, it’s a racist and sexist form of denialism that takes away from the necessary focus of the need for all of us to de-colonise our selves. 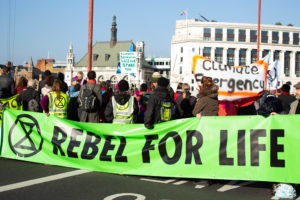 Basden concludes by reiterating that XR “isn’t about the climate” and “not even about ‘climate justice,’” but about the “deeper problems plaguing our culture” that need to be excised.

Conservatives and libertarians responded by slamming the XR agenda as a “war on the working classes” and staffed by wealthy and upper class millenarians who “are full of loathing for the aspirational poor.”

“‘Let them not eat cake!’, is the cry of these eco-aristos who essentially want to deny the masses the thing that they themselves have long enjoyed – wealth and comfort,” wrote Brendan O’Neill, elaborating on how “environmentalism has long had a strong streak of class hatred.”

Earlier in the week, the Daily Mail revealed that XR was paying activists up to £400 a week to lead the protests that have brought chaos to the streets of Britain.

Protestors have been paid more than £200,000 since the start of the scheme and the cost of the payments is increasing by at least £40,000 a month.

Tamsin Omond, the granddaughter of Dorset baronet Sir Thomas Lees, claimed a total of £1,340 for November and December last year.

XR now fears it could face six-figure tax bill from the authorities.