A white high school quarterback prospect has lost a scholarship with the University of Florida for saying the n-word while quoting rap lyrics.

Marcus Stokes of Nease High School in Ponte Vedra Beach posted a video to social media of him quoting the song while riding in a car by himself. “Welcome back, n—-,” the football prospect can be heard saying in the now-deleted two-second clip.

Stokes later issued an apology after the clip caused outrage. “I was in my car listening to rap music, rapping along to the words and posted video of it to social media,” Stokes wrote in a statement. “I deeply apologize for the words in the song which I chose to say.”

Stokes — who played at the same high school as Florida legend and Heisman Trophy winner Tim Tebow — confirmed that the scholarship had been rescinded as a result of the controversy.  “My intent was never to hurt anybody and I recognize that even going along with a song, my words still carry a lot of weight,” he said. 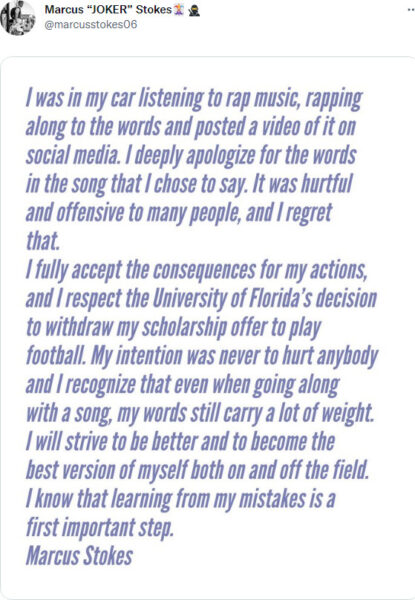 The majority of respondents to the teen’s tweet were outraged at the university’s decision and offered support. “As a black professional graduate of UF, if this action results in taking a scholarship, then I have a few professors who I’d like to recommend lose their jobs. This is atrocious!” wrote one Twitter user. “Good luck bro. [Shaking my head], this is sad and a sad day for UF.”

“Marcus has worked hard his entire life to do this one thing, play football! He has strived to be the best of the best. He doesn’t have one racist bone in his body. University of Florida doesn’t deserve this young man,” wrote another.

Others pointed out that the University of Florida recently picked up another top quarterback prospect in Jaden Rashada and suggested that the video was simply an excuse.

Marcus Stokes received scholarship offers from 11 Division-1 universities and switched his commitment from Penn State this past July.