For the second time in as many debates, the viewers of Telemundo have decidedly chosen the Republican candidate as the undisputed winner.

In a now deleted Twitter poll that was posted immediately after the vice presidential debate Wednesday night, Telemundo producers asked their viewers who they thought won the debate. By a margin of 76 percent to 24 percent, Telemundo viewers declared Vice President Mike Pence the winner. 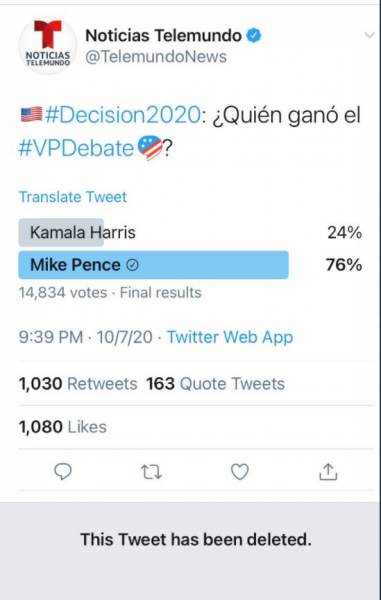 In another Twitter polls posted immediately after the first presidential debate, Telemundo viewers overwhelmingly chose President Trump as the winner. The President won that poll 68.7 percent to 31.3 percent. 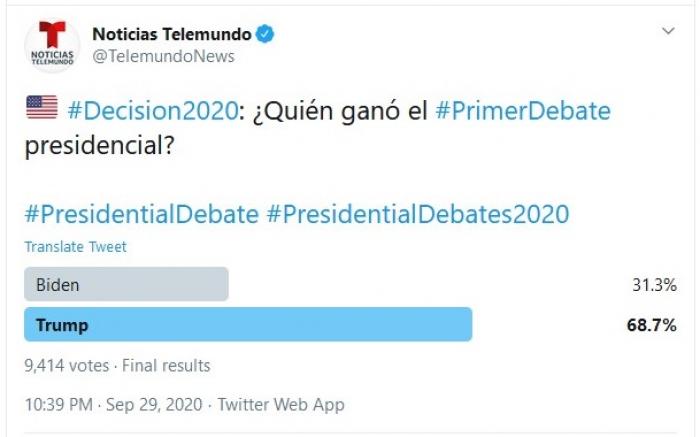 One of the big issues influencing the Hispanic vote this election cycle is the economy.

A July 27-August 2, 2020 Pew Research Center poll showed that the economy is the most important issue affecting how Hispanics will vote this General Election. Eight in ten people of Hispanic descent declared it the top issue this election season.

Hispanic lead the nation in the creation of new small businesses under President Trump. The average age of a Hispanic entrepreneur is 45. Since April, the Hispanic unemployment rate has fallen by 8.6 percentage points.

Another point that resonates negatively with Hispanic voters is the Democrat and Progressive propensity to treat Hispanics as single-issue voters when polling has proven that the concerns of Hispanics is wide-ranging and better reflect the mainstream concerns across the racial spectrum.