POLL: 92% of Americans Say Their Rights are Being Threatened

POLL: 92% of Americans Say Their Rights are Being Threatened

According to a poll released on Monday, 92% of all those who were surveyed believe that their fundamental rights were at risk of being taken away.

Out of the 2,002 Americans that were surveyed, 92% of these individuals were under the impression that they should be in fear of losing their rights.

“When you frame something as a threat, it creates a bit of a political response, and it creates division and encampments of special interest,” said John Gerzema, CEO of Harris Poll.

That’s why political parties and lobbying groups warn supporters with strident language, he said: It’s easier to drum up backing for a political cause by talking about an issue in terms of “threats.” 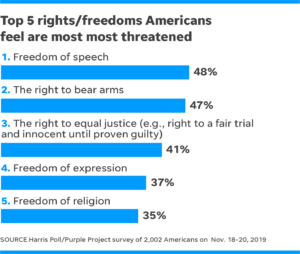 When questioned further as to which freedoms the person would miss if suddenly taken away, the poll numbers above rapidly shoot up.

“When you look at the things we really value, what makes America so special is these core tenets of our Constitution,” Gerzema said. “I just find it interesting to note how much Americans really value this.”

With more Americans in friction with opposing political ideologies, in a Public Agenda/USA TODAY/Ipsos poll, their results demonstrate that nine out of 10 individuals surveyed agree that it is crucial to the U.S. for us to reduce the levels of partisanship and divisiveness.

The Harris Poll further demonstrates over half of the participants, fifty-five percent, desperately crave that availability of more meaningful conversations between the parties.

Despite Americans arguably being divided at rates higher than on average in the nation’s history, these poll numbers demonstrate that overall we share the same core values that this country was founded upon and that many take for granted.

Only 16% of the 2,002 people recently polled thought their right to property was being threatened.A shockingly high 44% of these same individuals said  they would miss their right to own property