The story of a Black Lives Matter political activist and student at Texas A&M University who claimed racists left notes with the messages “All Lives Matter” and “you don’t belong here” on his car has been debunked by police, in yet another instance of a viral “hate crime” being exposed as a hoax.

Student, Isaih Martin, who openly advocates for Black Lives Matter on his Twitter account, posted pictures to the social platform in June showing three notes on his car’s windshield; one reading “All Lives Matter,” one reading “you don’t belong here,” and the third containing a racial slur. 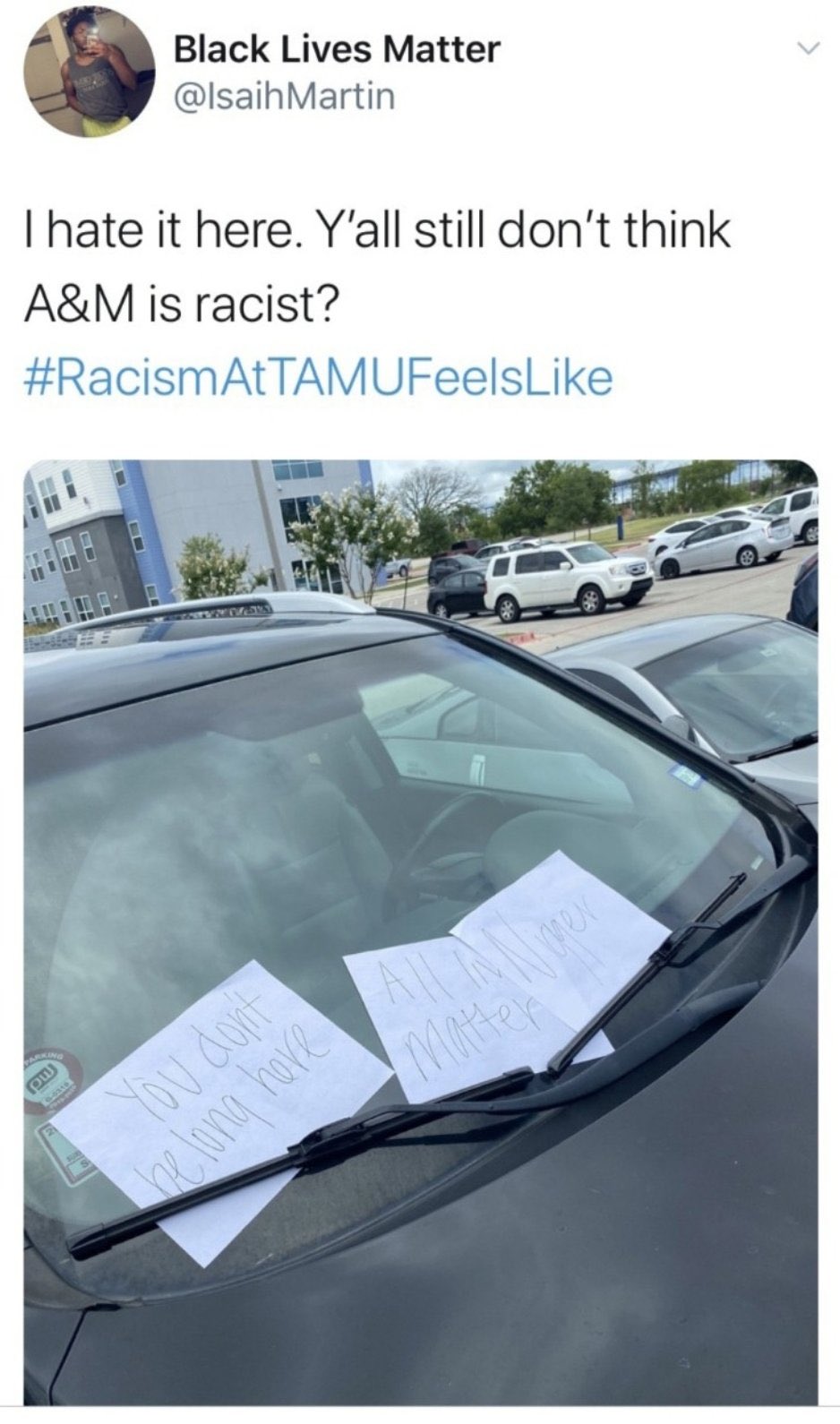 The official Texas A&M University Twitter account was quick to respond to Martin’s tweet with an apology: “Isaih, we are very sorry that this happened to you. Please report any incidents of hate you witness online or in person at http://stophate.tamu.edu so it can be reviewed.”

A massive $1,200 reward was also immediately offered by the university for information leading to the arrest of the heinous racists responsible for the “hate crime” against Martin.

Martin made media appearances talking about the incident and how he believed it was indicative of racism on the Texas A&M campus: “Racism is here in college station and that problem needs to be addressed and brought up and needs to be fixed.”

The $1,200 was never issued however, because on June 9 police closed the case after reviewing surveillance footage that indicated the culprit responsible was none other than Martin himself.

Isaih Martin (@I_Martin44), a BLM activist at @TAMU, claimed in ultra-viral tweet that racist messages were left on his car. Video shows he placed them there himself. He is now refusing to cooperate w/police. @TAMUPolice are not pressing charges. https://t.co/DSmf12TmO1 #HateHoax pic.twitter.com/39v7Y3SFsp

Police said in the report it was “difficult to distinguish any characteristics of the suspect in the video” but “based on video evidence, no other person had enough time to place the messages on Martin`s car other than himself.”

Police noted that the surveillance footage indicated Martin “was the only person with enough time to place the notes on his car,” prompting the BLM activist to profess he was “utterly disappointed” with the progress in the case.

Potential charges for falsifying a hate crime were ruled out by the county attorney, who told the police officer who filed the case report that the falsified notes “fell under the 1st Amendment free speech protections and that no crime had occurred.”

READ MORE: Black Girl Admits She Made Up Story About White Boys Cutting Her Dreadlocks