"I hope my small efforts to introduce you to a growing group of professionals like myself will be able to boost your important work for Secretary Clinton's campaign," said Kamran S. Bajwa.

A Dominion Voting advisor sought to “coordinate” efforts to “boost” the “important work” of the 2016 Hillary Clinton campaign, according to John Podesta emails found on Wikileaks.

As reported by Global Banking & Finance in 2018, Dominion Voting was acquired by its management team and Staple Street Capital, a private equity firm based in New York advised by Kirkland & Ellis LLP.

The emails show that, Kamran S. Bajwa, a partner of Kirkland & Ellis LLP, met with John Podesta in 2015 to discuss “sharing ideas” and “anything else that can help” the 2016 Hillary Clinton campaign.

“It was a pleasure to meet this past Th in NY. As discussed, I want to do whatever I can by way of sharing ideas, raising funds, recruiting campaign volunteers, and anything else that can help with your campaign,” said Bajwa on December 19, 2015. “I hope my small efforts to introduce you to a growing group of professionals like myself will be able to boost your important work for Secretary Clinton’s campaign.”

Podesta replied on December 19 at 8:42 pm: “Can’t remember whether we discussed Trump’s effect on ISIS/radical recruitment. You following that?”

“John, just a quick note to say I was catching up with my senior partner Bill Singer back in the office and letting him know of my intentions to help your campaign as much as I can. He was very effusive in his praise of you and asked me to send along his regards. I will look forward to being touch after the break,” said Bajwa on December 21, 2015.

An email sent by Bajwa on January 2, 2016, indicated her intention to meet with Podesta again to “follow up” on their previous discussions.

“Happy New Year. I wanted to follow up on our brief conversation a few weeks back and see if you would be available to meet this coming Tuesday in NY? I will be in town for work and my schedule is flexible on Tuesday so if you can meet, I can come to you at a convenient time and place anytime prior to 5pm,” said Bajwa.

“Milia Can you find the time,” said Podesta. 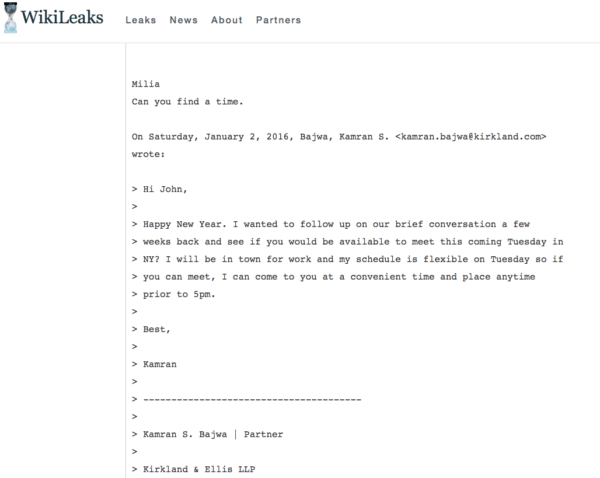 John Podesta was still serving as the Chair of the 2016 Hillary Clinton Presidential Campaign at the time of the email exchange.

The news was originally broken by the Gateway Pundit’s Cassandra Fairbanks, in a report released on December 5, 2020.