A drag queen who counseled children at a “safe haven” for LBGTQ youth has been arrested charged with 25 counts of child pornography, according to a report from Penn Live.

Brice Williams, who worked at the “safe haven” in Harrisburg, PA, is charged with 25 counts of child pornography for at least 49 photos and 25 videos of naked, prepubescent boys. According to the Pennsylvania Attorney General’s Office, Williams, a Chambersburg native, downloaded the photos between May and December 2020.

According to reports, some of the extremely graphic images depicted adults performing sexual acts on minors. Authorities said the victims were under the age of 18, but did not provide more details.

The affidavit said the photo and video downloads were linked to Williams’ email and home addresses.

The child pornography was downloaded under the name “Ana D,” the affidavit further said. The arrested drag queen reportedly performs under an “Anastasia Diamond” stage name.

In July 2021, Williams sat down for an interview with Penn Live to discuss the “safe haven” for LBGTQ youth. GLO Harrisburg offers a “safe space” for “LBGTQ youth of color to do HIV/AIDS prevention and awareness work.”

“I feel as though this is so important because I know there are little kids like me who are queer who are Black who are still not able to look up to anyone,” Williams told PennLive. “So that’s the reason why I got into this line of work. I wanted to make … a big impact for folks in my community.”

In 2020, the LGBT Center of Central PA gave Williams the 2020 Rising Star Award.

Williams is currently being held on $100,000 bail, though he has reportedly been unable to pay. He will be held at the Franklin County Correctional Center, officials said. 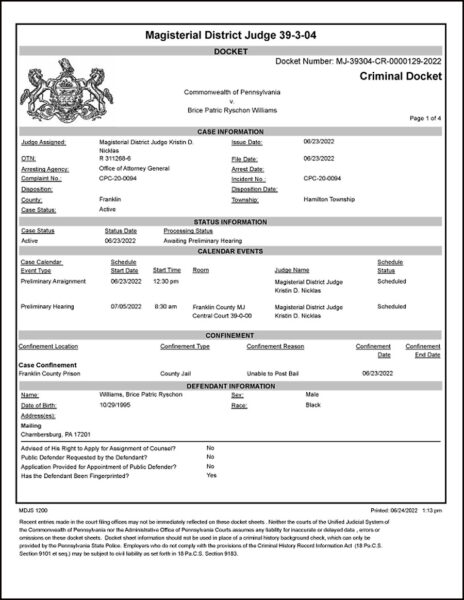