Recent polling data shows that the Democrat Party is truly the party of hate, with a super-majority of Democrat college students admitting that they dislike and even discriminate against their conservative-minded peers and fellow Americans. Figures compiled among college-aged Republicans show the opposite, with only tiny fractions of those young people saying the same.

The polling, conducted by Generation Lab in collaboration with Axios, surveyed 850 college students from around the country on America’s partisan divide. Despite corporate media depictions blaming Republicans and conservatives for increased polarization, the data shows that Democrats are truly the so-called party of hate, and they seem to have widened the gap through their multi-generational dominance of academia and public education.

The poll results found that over 70% of those surveyed who call themselves Democrats wouldn’t even go on a date with a suspected Republican, while vice versa, only 41% of college Republicans say that dating a Democrat would be a dealbreaker.

Additionally, 41% of self-described college Democrats would refuse to shop at or support a Republican-owned business. 37% of them say they wouldn’t even have Republican friends, and 30% say they’d rather be unemployed than work for a Republican business owner. Among their Republican schoolmates, just 7% of those surveyed say they wouldn’t shop at Democrat businesses or work for a Democrat, while a mere 5% say that other peoples’ political views would influence their choice in friends.

See the results below: 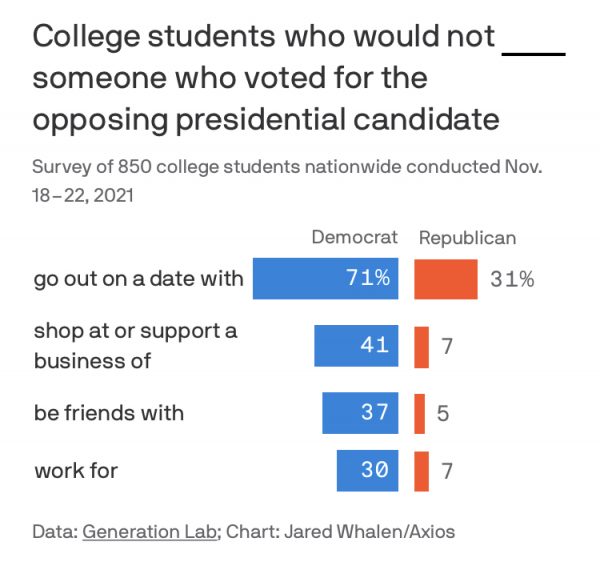 While similar polls conducted among other segments of the population have concurred with the results of the Generation Lab/Axios data, the massive level of Democrat college students who openly admit that they despise and discriminate against their classmates has surprised many; but it shouldn’t.

The left has enjoyed a domineering grip on academia for generations and in recent years, specifically since the 2016 election of 45th President Donald Trump, left-wing campus groups and the professors who support them have kicked their political efforts into overdrive, oftentimes expressing violent opposition to their conservative peers. These student groups, whose members frequently make up the foot soldiers of AntiFa and Black Lives Matter, have rapidly expanded their presence on campuses around the country and appear to be well-funded, oftentimes advocating for the end of free speech and the expulsion of conservative students.