An estimated $1 million in advertisement reservations was pulled by the NRCC even though the Left's attacks against Majewski are simply inaccurate.

The National Republican Congressional Committee (NRCC) turned its backs on Ohio Congressional candidate J.R. Majewski weeks ahead of the election.

An estimated $1 million in advertisement reservations was pulled by the NRCC even though the Left’s attacks against Majewski are simply inaccurate.

AP News requested a “verification of service” from the Air Force in late July.

The Air Force explained the “list of awards and decorations may be incomplete or not up to date” and they did not have full records to accurately conclude Majewski truly did not serve in Afghanistan, despite Axios and leftwing media pushing such a  narrative.

“As far as overseas deployments go, we show one deployment to Qatar from May 2002 to Nov 2002. What he did or where he may have went from that location we don’t have visibility on,” the email reads.

“Full service records for anyone who separated prior to Oct 2004 are at the National Personnel Records Center, which is part of the National Archives,” the email adds.

Read the email by clicking here. 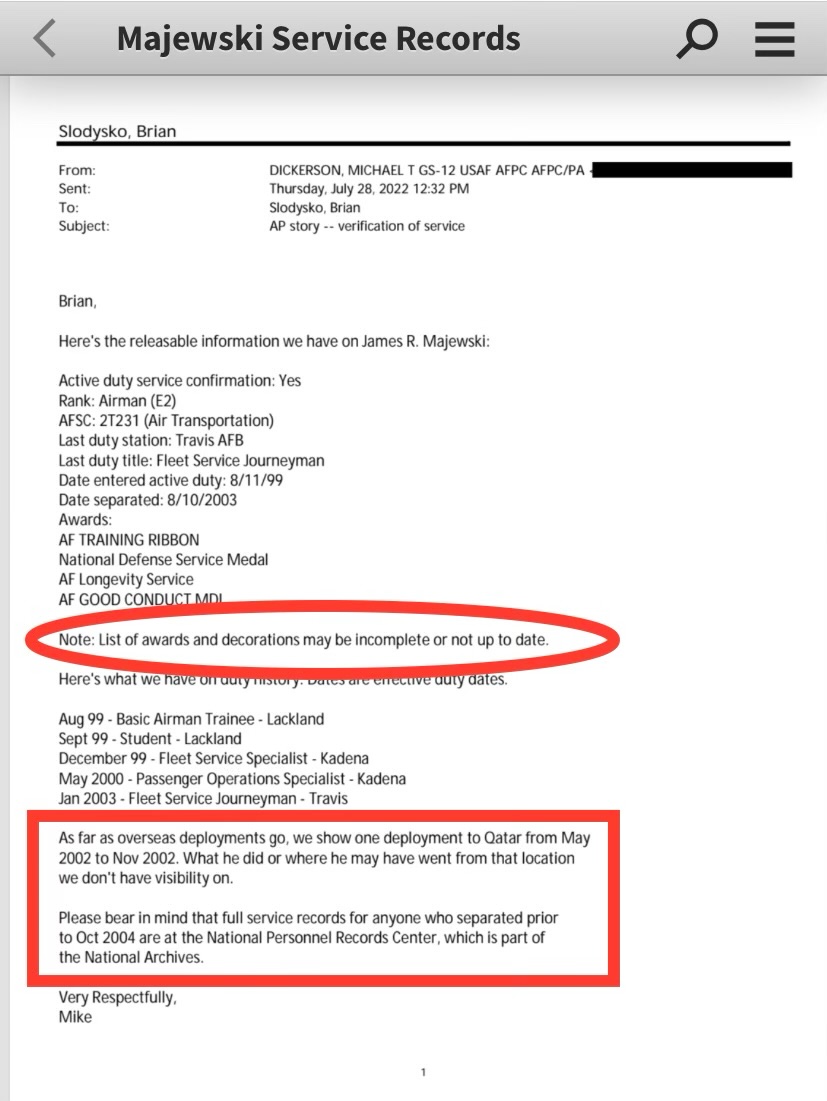 This baseless attack orchestrated by the Democrats seems to have been strategically held for the past two months in hopes of hurting Majewski’s campaign as it is in the final stretch before the November 8th election.

In a Facebook video, Majewski reasserted he did, in fact, serve in Afghanistan, and contested that his opponent, Democrat Marcy Kaptur, who has served in Congress for over 40 years, is slandering him in the same way the Democrat Party slandered former President Donald Trump.

“Over the past 12-16 hours I received multiple death threats, so has my wife, and so have many members of my team. All because Marcy Kaptur and the liberal media are scared that I’m going to win on November 8th. They are scared that Marcy’s 40 years of Democratic demise in the 9th district of Ohio are gonna come to an end,” Majewski said.

“And I served my country, our country proudly. Multiple bases in the Middle East. Multiple bases in Afghanistan. My team and I provided logistical support for fighters on the frontline. And I never believed that I would have to defend my military service. But here I am. This is what politics have come to,” Majewski continued, defending his military record.

“The Democrats are so thirsty to retain their power that they’re willing to attack me. A guy who spends a lot of time supporting veterans. In today’s America, it’s a crime to love your country. It’s a crime to support President Trump. I’m not gonna sit on my hands anymore. I’m not going to be quiet about this. This is a shame. Marcy Kaptur, you should be ashamed of yourself,” the Ohio GOP candidate added, tearfully,

“And that’s all I have to say. I’m going to continue to fight. This country needs fighters. And I’m one of them. And this district elected me to fight for them. And I’m gonna do that.”

“Listen to the signal, and not the noise,” Majewski concluded, encouraging Ohioans to recognize this media hit is a shameful attempt to hurt his election chances.