Nevada: Dems Shell Out Millions in Effort to Stop Trump-Backed Joe Lombardo in the GOP Primary

"You should be able to ask questions about anything you're putting inside your body."

After being temporarily suspended from Twitter for questioning the COVID vaccine, pop star Nicki Minaj encouraged Americans to “open your f**king eyes” to the censorship currently happening in the West, adding that her ban made her think that “there’s something bigger” going on.

Minaj, the Trinidadian-born pop star, had made global news in recent days, for tweeting in support of medical freedom, explaining that someone she knows became “impotent” after taking one of the controversial COVID vaccines and then urging her followers to pray and weigh the benefits of getting vaccinated. In response, globalist media outlets became enraged at the star, with only Tucker Carlson and other pro-freedom outlets defending her. On Wednesday evening, Minaj even tweeted out a clip of Carlson defending her, causing an even greater backlash from pro-vaccine defenders.

Shortly after posting the clip from Carlson’s show defending her tweets on the COVID vaccine, Minaj was temporarily suspended from Twitter. In a post to Instagram Stories, Minaj said that just as she was about to post a poll on the site, she realised that she had been put in “Twitter jail,” because “they didn’t like what I was saying over there.” In an email to National File, Twitter claimed that there had been no “enforcement action” taken on her account, casting confusion as to why Minaj was not able to post. 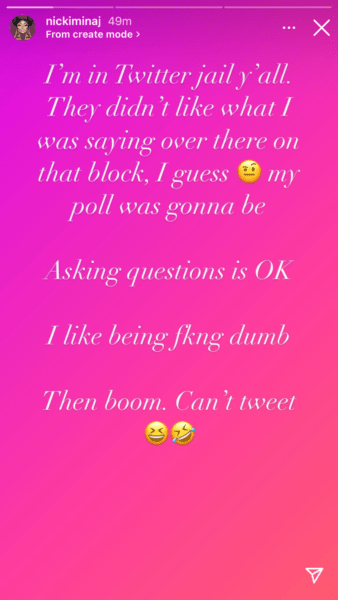 Minaj proceeded to go live on Instagram, slamming the censorship from Twitter just for asking questions about the COVID vaccine. “You can’t speak for the fear of the mob attacking you,” Minaj said, saying it should give people “chills up and down your f**king spine,” comparing what happened to the oppression of Christians across the world and other authoritarian regimes:

You should be able to ask questions about anything you’re putting inside your body. We ask a bunch of questions about the most simple things… But you can’t just innocently ask a question about something going in your body? I remember going to China and they were telling us that you can’t speak out against the people in power there. I remember all of us thinking, oh okay, well we understand and we respect the laws here, and that it’s so different where we live… Don’t y’all see that we are now living in that time, where people will turn their back on you… People will isolate you if you simply speak and ask a question.

In what may not be a surprise to some, Minaj added that many other musical artists feel the same way as her, “but they’re afraid to speak up” for fear of the same backlash happening to them. “I will never use Twitter again,” she added, noting that her ban from Twitter was making her think “that there’s something bigger” happening with censorship in general around the COVID vaccine:

I kept on seeing all these people with all these conspiracy theories I was like, oh what, please. But what in the world scared y’all that much that made you disable my f**king Twitter? I have not put out anything that I said was a fact about anything. I simply said we should be able to ask questions and speak. It’s scary when they start telling you that you can’t ask questions about anything… Listen to me. Please. Open your fucking eyes. Open your eyes! That’s all.