by Kim Coulter
in Life

In the short film a pink haired feminist is featured with a baby she “borrowed” from someone “as a prop to scare you away from making the worst mistake of your life.”

Choice 42 describes in their mission statement that their “main objectives are to create awareness about the humanity of pre-born children, and to provide support to women who are facing unplanned pregnancy or dealing with post-abortion problems.”

The video mocks the nature of motherhood, and makes a joke out of feminists wgo believe that having children will rob you from the opportunity to do any of the things a woman could normally enjoy without a child.

“If this was your baby, your life would be all about her. No more girls night out. No more me time at all really.”

Further, ‘Motherhood Sucks’ makes a joke out of the trope that women who become mothers before they finish their higher education pursuits will find it ‘physically impossible’ to return to and receive a degree.

“There are no doctors or lawyers or actresses who are moms. #fact”

At the 2020 Golden Globes, Williams appears to credit her abortion for her fame.

‘Sometimes, messy and scrawling, sometimes careful and precise. But one that I had carved with my own hand, and I wouldn’t have been able to do this without employing a woman’s right to choose.’

Motherhood ends with a comparison of the choice to have a baby and mocks the idea that you cant achieve awards in excellence once you have a child. 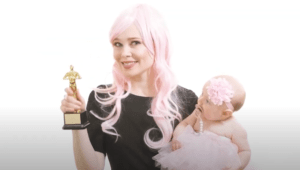 “Ladies save yourselves. Think of… yourself. Don’t have one of these-So not worth it. I mean which would you rather [Golden Trophy or a Baby] Honestly, totally a no brainer! And not to mention pregnancy our bodies weren’t built for that!”