The Biden Administration recently hired a drag queen who has boasted about having sex with animals for a high-level position in the Department of Energy. Sam Brinton — who has “lectured” on kink at college campuses — was hired to serve as the Deputy Assistant Secretary of Spent Fuel and Waste Disposition in the Office of Nuclear Energy. Brinton’s hire was first reported by The National Pulse.

He also goes by “Sister Ray Dee O’Active”, which he describes as his drag queen alter ego. “Sam has worn his stilettos to Congress to advise legislators about nuclear policy and to the White House where he advised President Obama and Michelle Obama on LGBT issues,” reads Brinton’s website bio. Brinton has also conducted interviews where he discusses “fetish roleplay” and has even boasted about participating in bestiality.

In one interview, Brinton explains how he roleplays as a “pup” handler. “I actually have trouble when we transition from pup play to having sex,” Brinton explained. “Like, no, I can’t have you whimper like that when we’re having sex,’ because I don’t want to mix that world. It’s interesting, because he doesn’t have to come out of pup mode to have me f*** him. I personally have to bring him out of pup perception for me. But then I’m still treating him as a submissive to me.”

The new Biden hire went on to defend bestiality and argued that such practices should be normalized. “One of the hardest things about being a handler is that I’ve honestly had people ask, ‘Wait, you have sex with animals?’” Brinton said. “They believe it’s abusive, that it’s taking advantage of someone who may not be acting up to a level of human responsibility… The other misperception is that I have some really messed up background, like, did I have some horrible childhood trauma that made me like to have sex with animals.”

Brinton has also lectured on kink at college campuses, including a class for the University of Wisconsin-Stout Gender and Sexuality Alliance on the “Physics of Kink” on March 7th, 2018. A description of the event said the “lecture” was to include “live demos on the tension forces of bondage, thermodynamics of wax play, physics of impact, and circuits of electro play!”

In another “lecture”, Brinton led a “Kink 101” session at the University of Nebraska at Omaha. A photo shows Brinton in a dress, standing over three kneeling males wearing leather bondage-style dog masks. 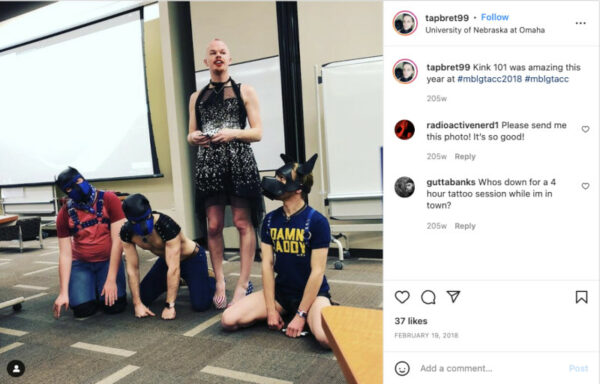 Brinton previously worked with the Obama White House on LGBTQ+ issues and has advised Congress on nuclear policy. He recently announced his new gig in a February 10 tweet. “I have accepted the offer to serve as the Deputy Assistant Secretary of Spent Fuel and Waste Disposition in the Office of Nuclear Energy for the Department of Energy.” wrote Brinton.

This is the Biden’s new Dept of Energy hire: gender fluid with a background in having sex with animals, “kink,” and drag. Even in Weimar, this kind of perverted degeneracy was kept underground. One can only think what the eventual counterreaction will be. pic.twitter.com/C2POkwOwUa