Minneapolis Police: Be Ready To Get Robbed And ‘Do As They Say’

Minneapolis Police: Be Ready To Get Robbed And ‘Do As They Say’

The Minneapolis Police Department, reeling from riots in the aftermath of George Floyd’s death, are now warning residents to “Be prepared to give up your cell phone and purse/wallet” to robbers and, if confronted by criminals, “Do as they say.”

Here is the notice obtained by Alpha News: 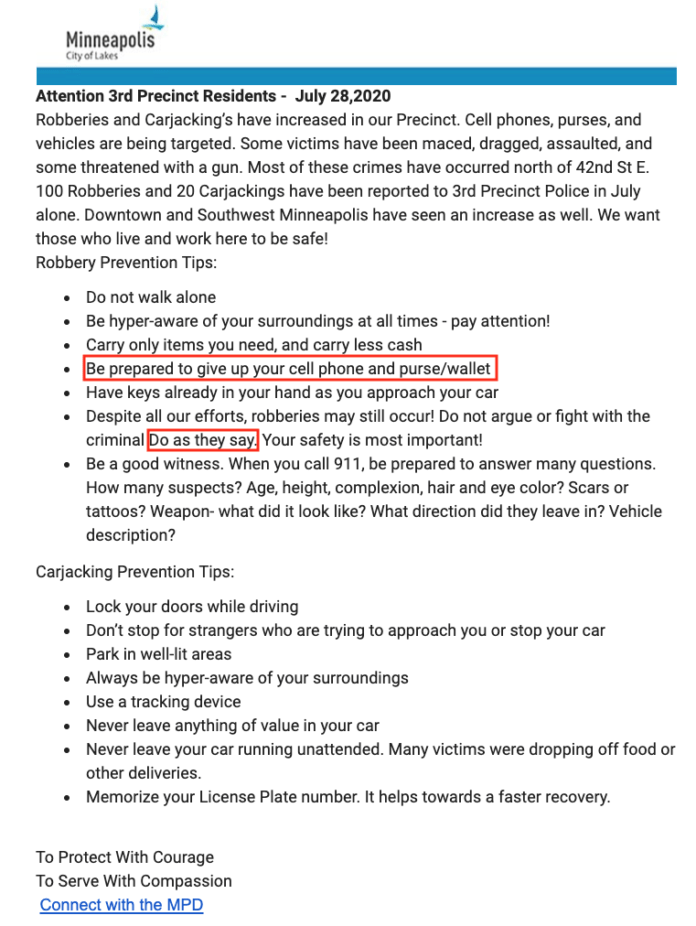 NATIONAL FILE recently reported: Government-funded youth groups as well as foster care providers and social workers are encouraging, supporting, and in some cases organizing young people under their jurisdiction to protest against racism and the police in the aftermath of George Floyd’s death. A program funded by the Department of Labor put together a plan to help youth groups activate their young people and send them into the streets to protest for Floyd.

Oakland’s School of Unity and Liberation, which works with at-risk youth and writes curricula to radicalize foster youth and is funded by the Rockefeller family’s Rockefeller Brothers Foundation and others, has been going all in on the protests in coordination with Black Organizing Project: 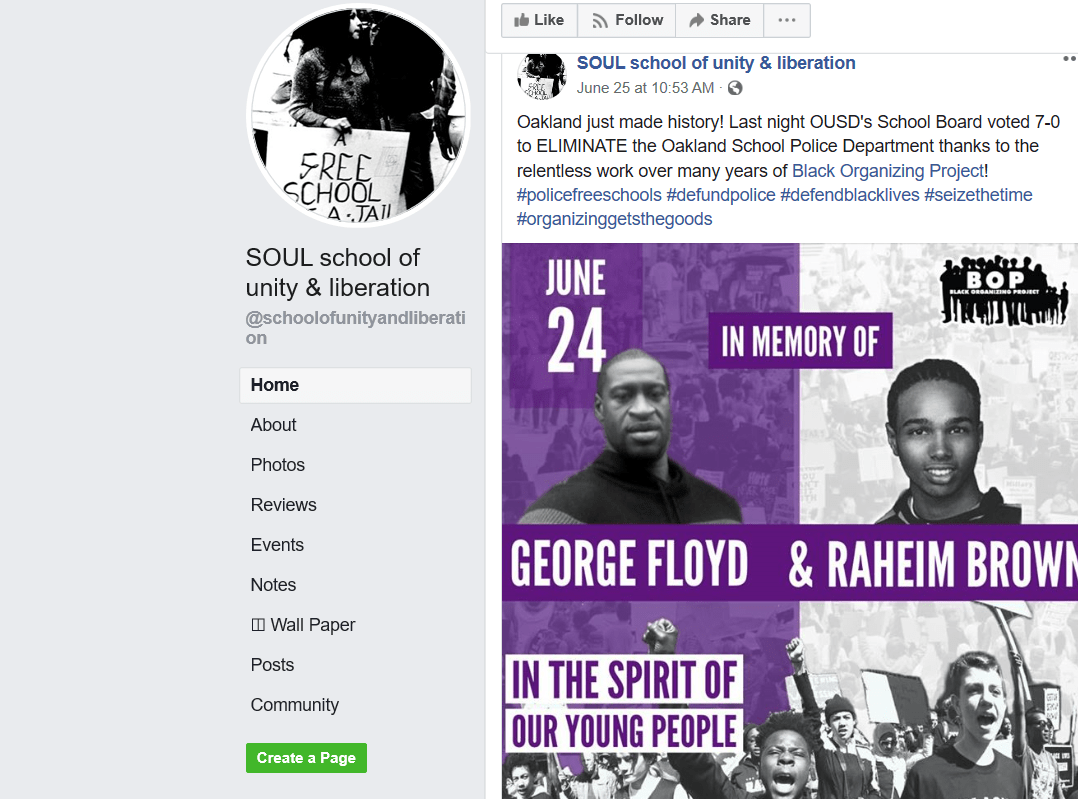 The National Foster Youth Institute: “As an organization, the National Foster Youth Institute stands in solidarity with the protestors who are demanding justice. We stand with those who are ready to make bold, transformational change. We stand with the people and organizations that are ready to move beyond talk to take meaningful action. Lives depend on it.”

YouthBuild Louisville is a job training and leadership group that is “primarily funded by the Department of Labor and Louisville Metro Government.” Its CEO Lynn Rippy laid out a plan for youth agencies to “Offer opportunities for them to express themselves, including fears. Validate their anger. Safe ways of expression include writing, talking, calling in the middle of the night, etc. Advise them of safe strategies if they’re taking part in demonstrations.” Rippy said that “We want them to let their voices be heard, to understand they have power” and encouraged young people to demonstrate during daylight hours.

The government-funded nonprofit Youthprise went with the “Dada, What Color Was George?” approach while stating, “At Youthprise, where I am honored to serve as Vice President, we applaud the young people who have refused to give up in the face of adult opposition and are currently on the front lines peacefully fighting for equity and justice!…We are committed to addressing disparities rooted in institutional racism, and we won’t stop until we see change. Soon we will be sharing meaningful action steps Youthprise will be taking to address inequity in the Black community. We will also be issuing a call to action to our broader community. It will take all of us not turning away, but turning over every stone to uncover, expose, and correct the disparities plaguing our community. Our youth are leading the way; let us join them!” Youthprise claims to have “granted over $30 million to youth initiatives, provided training and technical support to over 100 youth organizations, and successfully lobbied for over $3.1 million in direct state approrpriates.” The group is a tax-exempt 501(c)(3). According to a financial statement, “The Organization received 87% of revenue from 10 governmental entities and one foundation for 2018.”

Foster VA, which is “a campaign started by Extra Special Parents (a licensed child placing agency) to raise awareness of Virginia’s need for great foster families”: says “Being activists in this generation is very important” and encourages children to be taught to “advocate” and build a “network with those with the same passions.” Not having this activist conversation with children, according to the group, puts them in danger.

Treehouse, “Washington’s leading nonprofit organization addressing the academic and other essential support needs of more than 8,000 youth in foster care” said: “The hearts at Treehouse ache for George Floyd, Breonna Taylor, Tony McDade, Ahmaud Arbery, and so many other precious lives that have been stolen at the hands of police whose duty is to protect our citizens. Treehouse stands in community with those who have been impacted so directly by this targeted violence. Treehouse believes in long-term sustained action to rebuild the systems that are failing…Treehouse notes that it is essential to remember the victims’ names and stories and spread the word about the injustice happening in our society. Treehouse hopes for individuals and communities not to turn away in silence but to create awareness, change, and justice.”

The Youth Justice Coalition organized a protest in Los Angeles. According to the Chronicle of Social Change: “Organized by the Youth Justice Coalition, protesters in downtown Los Angeles demanded that L.A. city and county shift hundreds of millions of dollars away from the police, Sheriff and Probation departments – public funds they say should be invested in youth development centers and employment opportunities for young people. The coalition is also calling on local leaders to remove police officers from schools, shutter juvenile detention facilities and provide free transportation passes to the city’s youth.”

Casey Family Programs, which claims “We provide consulting services to child welfare systems; direct services to children and families; public policy resources; and research and analysis” stated: “The image of white people standing in the State House of Michigan with guns, or screaming racist statements in the streets of Charlottesville without police intervention stand in stark contrast to the violent military-like responses to demonstrators in Minneapolis, Ferguson, New York City, Philadelphia, Washington, D.C., and countless other cities across this nation. Until all of the eyes that look at Black, Brown and Native people actually see us as human beings who deserve the same life-sustaining respect, opportunities and treatment that white people get in America just by being born, these images and confrontations will continue to be repeated.”

Ampersand Families: “Ampersand Families understands that Mr. Floyd’s murder, like that of Philando Castille, Michael Brown, Kendra James, Sean Bell, Eric Garner, Alton Sterling, Breonna Taylor and 100s of other Black Americans, is not an isolated incident committed by a few rogue officers, but a symptom of systemic, institutionalized and historical racism borne at the founding of this country and living robustly today.   That racism has been built into the structure, procedures and, too often, personnel of our law enforcement agencies…”Ampersand Families calls, especially to our White-bodied families, supporters and colleagues to join us in taking responsibility to do our own anti-racist work.  And, to our BIPOC youth, families, supporters and colleagues – Ampersand Families sees you and stands with you.”

National Association of Social Workers Minnesota chapter: “We must make a statement – silence holds us complicit. But our members, our communities, don’t need an official statement from us to know where we stand. Social Workers fight for social justice – every single day. We do it with our words, with our actions, with the policies that we seek to establish and change. But it isn’t enough. The National Association of Social Workers Minnesota Chapter (NASW-MN) is sad and outraged at the events surrounding George Floyd’s death, and our hearts go out to his family, friends, and community. We’re sad. We’re outraged. But we’re not shocked, we’re not surprised. This is not new. Racism, xenophobia, police brutality, the school to prison pipeline – and too much more – are real. There is so much hate, disunity, and polarization in our world, and we simply cannot and will not stand by. Being sad and outraged is not enough. We must do better. We must ALL join this fight. At times in our history when big shifts were made, it was because people came together. Not ALL people – we cannot wait for ALL people to get on board. Together we must start imagining and work toward an equitable future. We’re looking for ways to be part of a solution – please keep an eye out for an upcoming member chat about our next steps.”