Timothy Barr, who recently announced his campaign for U.S. Congress in Georgia’s 10th district, has a long history of virtue signalling against 45th President Donald Trump, and more recently, was utterly silent during President Trump’s 2020 campaign and fight for election integrity.

In 2016, before President Trump was the Republican Party nominee and was loathed by the Republican Party establishment, Barr liked a tweet saying that “Trump acts like a dictator” when questioned. Around this time, Barr also liked a tweet from rabid anti-Trump David French, claiming that President Trump bullies women, lies habitually, and incites violence. 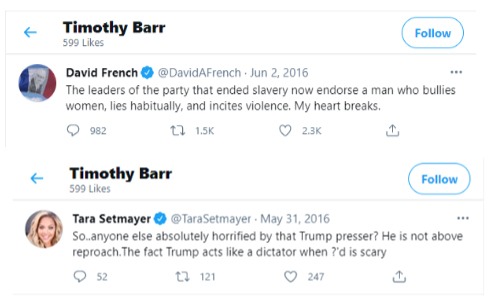 Barr also lobbied for his “good friend” Georgia Lt. Governor Geoff Duncan, a member of the Never-Trump wing of the Republican Party who was reported 11 Alive to be attempting to “wrest control of the GOP out of the hands of Donald Trump and his supporters, to ‘heal and rebuild’ the Republican Party in Georgia and across the country.” In addition to publicly supporting Duncan, Barr also donated $3,000 to Duncan’s campaign according to the FEC. At the same time, Barr never donated to either of President Trump’s campaigns.

More recently, while in his position as a Georgia State Representative, Barr refused to petition the executive branch of the state to stop what many consider to be clear election fraud during the 2020 election.

While Barr appears to be painting himself as a champion of the America First push for election integrity, he has already been subject to attack from at least one influential Georgia Republican. Debbie Dooley, The Tea Party Movement Co-Founder and President of the Atlanta Tea Party, recently wrote that “If GA-10 Congressional candidate Timothy Barr actually supported Trump, then he would not have refused to sign a petition calling for a special session in December that Trump requested. I know he was asked to sign it and refused. The petition was publicized.”

The letter he sent, at Jody Hice's request, to VP Pence and others objecting to certification of GA electors was done in private. Perhaps Barr did it to get Hice's support in case he ran for Congress. It was rumored for a while that Hice would not seek re-election.
2 of 2

The petition Dooley refers to called for an immediate special session for the Georgia legislature, something anti-Trump Gov. Brian Kemp stonewalled, and would have allowed the legislature to consider the credible reports of widespread voter fraud in the state and potentially decertify the state’s electors that eventually went to Joe Biden. (READ MORE: VoterGA Finds Thousands Of Fraudulent Biden Votes In Georgia, Has Photo Evidence Of Falsified Tally Sheets)

“The letter he sent, at Jody Hice’s request, to VP Pence and others objecting to certification of [Georgia] electors was done in private,” noted Dooley. “Perhaps Barr did it to get Hice’s support in case he ran for Congress. It was rumored for a while that Hice would not seek re-election.”

Also among Barr’s critics is the Team Overhaul Twitter account, which describes itself as a “stan account” for Barr’s opponent, the current frontrunner Mike Collins. “Politician Timothy Barr is not for Trump — never has been. We have enough GOP traitors and fake MAGA in congress as it is. We don’t need any more closet Never Trumpers sabotaging the America First agenda,” the account wrote alongside a video about Barr.

Politician Timothy Barr is not for Trump–never has been. We have enough GOP traitors and fake MAGA in congress as it is. We don't need any more closet Never Trumpers sabotaging the America First agenda. #gapol #MAGA pic.twitter.com/x3SPYvOEM8

Joe Biden is reportedly in the "final stages" of ordering 5,000 US military troops to be deployed to Eastern Europe amid mounting tensions between Ukraine and Russia.
By Andrew White  January 24, 2022 Comment MoreShare