Mayo Clinic Doctor Fantasizes About Kicking Unvaccinated, Anti-Maskers ‘In The Tender Parts,’ Puts Him In ‘Zen State Of Meditation’

Mayo Clinic Doctor Fantasizes About Kicking Unvaccinated, Anti-Maskers ‘In The Tender Parts,’ Puts Him In ‘Zen State Of Meditation’

Another Mayo Clinic high-level doctor posted disturbing messages about sacrificing the unvaccinated, essentially allowing them to die, for the sake of the greater good “just like mass casualties.”

Dr. Mark D. Sawyer, another high-level general surgeon at the Mayo Clinic based in Minnesota, has posted disturbing messages online about his belief that the vaccinated will have to be “triaged to get their care prioritized over” the unvaccinated “just like mass casualties.” The doctor also fantasizes about repeatedly and “rhythmically kicking” vaccine and mask skeptics “in the tender parts” to put himself in a “state of zen meditation,” according to his posts on Facebook.

On a Facebook post, Dr. Sawyer drew a comparison between a science fiction short story called “The Cold Equations” and COVID-19 vaccine status in America. “It’s about a teenaged girl that stows away on her brother’s one-person spaceship, and he realizes he doesn’t have enough fuel to get them both safely to the destination. If they both stay on board, they will both die. One will have to go out the airlock so the other can live. I think it’s past copyright on the internet if you want to try and find it, so I won’t spill the ending,” wrote Dr. Sawyer.

“But regarding COVID, and vaccine status, we are running tight,” continued Dr. Sawyer. “Lots of places have no ICU beds NO hospital beds; period, NO rooms in the ER.”

Dr. Sawyer then claimed that the unvaccinated will “have to be” sacrificed, seemingly left to die, for the greater good. “We are approaching the point where the morality of rationing care is moot. It will have to be done; somebody is going to have to be triaged to get their care prioritized over others, just like mass casualties,” wrote Dr. Sawyer. “My prediction, without judgement, is that the question of does a patient who deliberately chose not to vaccinate go to the back of the line is almost certainly going to be on the table across the country.”

On Dr. Sawyer’s Facebook profile, his profile picture says “disinformation is deadly” at the top, with “vaccines save lives” at the bottom. The profile picture also includes a cartoon syringe. 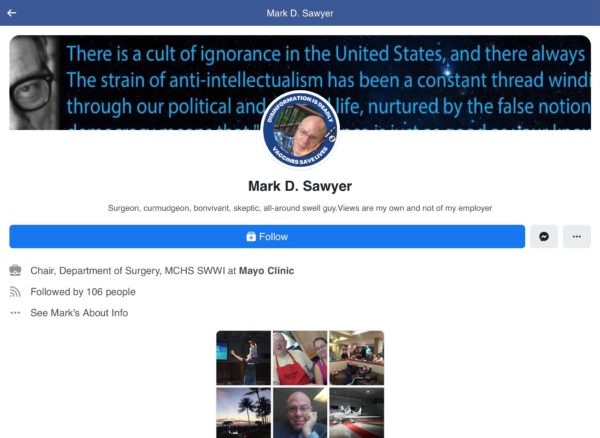 Dr. Sawyer frequently posts about unvaccinated Americans and how they are being “swayed by misinformation” which he claims isn’t “just an ‘opinion,’ it is literally killing people.” 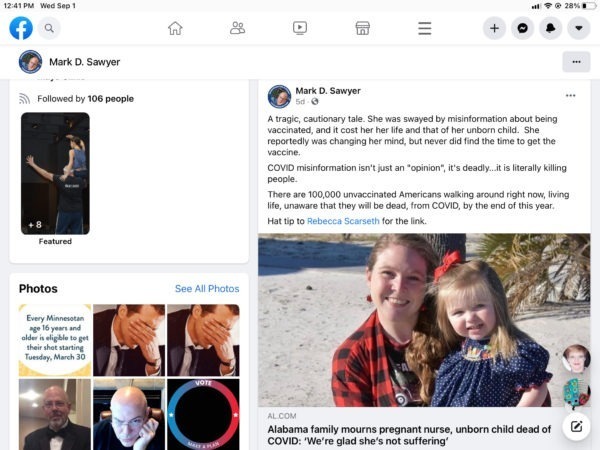 Dr. Sawyer also seemingly supports segregation. In one Facebook post, the Mayo Clinic doctor showed off his candy dishes; one for the vaccinated, the other for the unvaccinated. “I think it’s ok to put the candy dish out at my office meeting table now,” wrote Dr. Sawyer. 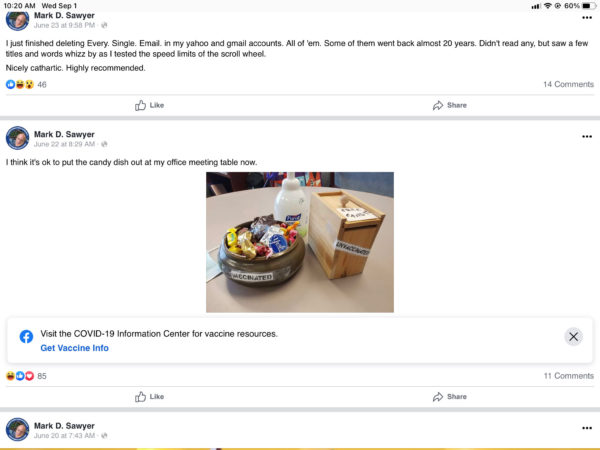 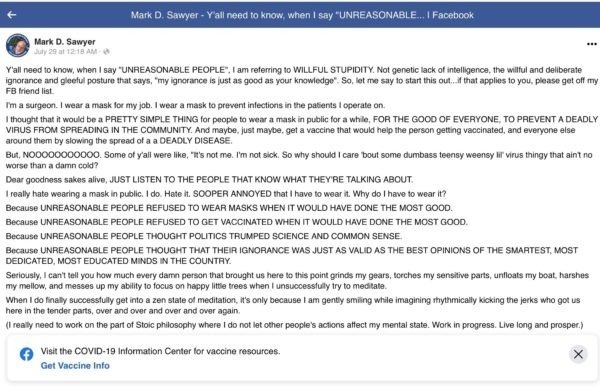 Dr. Sawyer said that there “are a few lines that can’t be crossed if one wants to remain my friend: Racist. Bigot. Anti-LGBTQ,” in another Facebook post. “But at the top of my list right now, in bright neon colors, is anti-vaxxer. It’s not an opinion, it’s just wrong, and every time one of them tries to convince others on the internet, it’s a bullet fired at common sense and reason and humanity in the fight against COVID…and it kills people just as surely as a bullet would.” 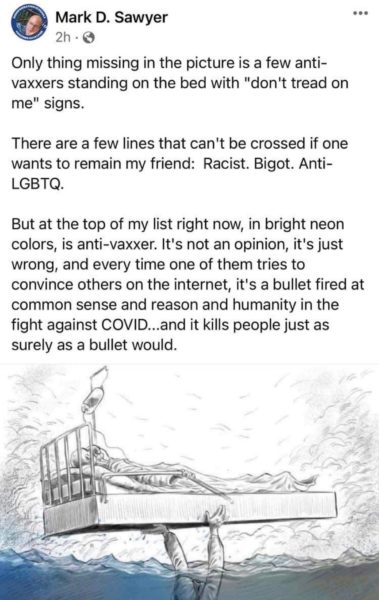 Dr. Sawyer is not the only Mayo Clinic doctor that has been posting disturbing remarks about vaccine skeptics online. As National File previously reported, Dr. Courtney Bennett, a high level cardiologist at the Mayo Clinic in Minnesota, where she directs the Cardiac Intensive Care Unit, appeared to advocate for allowing “self centered” and “ignorant” vaccine skeptics to die in a disturbing rant posted on her Facebook account.

“I wish I was sharing something more exciting, but I can’t because we live in a society of self centered people who get their medical advice from sources like YouTube or OAN yet beg us to help them breath using technology developed by actual science when they’re blue and gasping for air,” wrote Dr. Bennett. “Do me a favor and don’t burden our hospitals because you are ignorant. Ask YouTube or OAN for help. Sorry for the rant, but I’m tired.”

National File reached out to Mayo Clinic for comment on the remarks made online by both Dr. Mark Sawyer and Dr. Courtney Bennett, but still has yet to receive a response. There have been no indications that Mayo Clinic has any plans to fire or ask for the resignations of the two doctors.