Delaware saw massive “fraudulent” votes being submitted in the 2020 election and nursing homes that had way more votes submitted than people who lived there, according to 2020 Delaware U.S. Senate candidate Lauren Witzke and a memo from Patriots for Delaware that has been obtained by NATIONAL FILE.

Lauren Witzke: “Preliminary Audits of the Delaware 2020 elections are damning. Only 10% of the votes have been audited and they’ve already found over 20k fraudulent ballots. Internal polling before the elections were EXTREMELY close. They couldn’t let Joe Biden’s home state seem even remotely competitive while they were busy stealing the swing states- would have raised a few eyebrows. Ladies and gentlemen, it’s looking like I pulled in at least 47% of the vote- I maybe even won. Thank you to Seth Keshel’s Team for all of their hard work. More on this to come. Stay tuned!”

According to a Patriots for Delaware memo written by Jennifer Cooke: “Patriots for Delaware held a public meeting on Sept. 28 where they relayed some initial findings in reference to their 2020 election canvas that have raised more questions than answers. Not only did dead people vote, there also seems to be a high number of votes coming from some nursing homes who don’t have nearly that many beds. There are 296 votes that came from a nursing home with only 94 beds. That’s 315% votes coming from a facility that is rarely at full occupancy. There were several other nursing homes that reported over 100%, while most facilities in the state reported anywhere from 0% to 75% votes in relation to available beds. Where are all the people that voted from these nursing homes? How could the nursing homes have been that full, occupancy wise, given the Covid-19 protocol was to lock the facilities down and keep our elderly socially distanced and quarantined? It was also revealed that hundreds upon hundreds of votes from “Uniformed and overseas citizens” had a mailing/residential address listed as the addresses of the three county elections offices in the state. The election law clearly states that these particular voters’ addresses should be listed as their last residential address. People don’t live at the state-owned Carvel building in Wilmington. Are these votes legal?

Another subject that is called into question is the voter rolls. Almost 30 thousand voters were added to the voter rolls in the months leading up to the Nov. 3 election. Oddly enough, over 11 thousand of those voters were removed from the rolls in August 2021 alone. The state only provides month-to-month data on voter registration totals. Any added or removed voters, on a day-to-day basis, would not be apparent in the month-to-month data. Why were so many voters added to the rolls starting a few months before the election and why are they being removed now? Why would 11 thousand people unregister to vote in one month? Were the elections offices “cleaning up” their voter rolls? If so, why wait until after a historic election to remove voters?

Last, is the astronomically high 47,205 ballots sent to adjudication. That amounts to 25% of all mail-in/absentee ballots cast in the state. The FEC allows .0008% of ballots to be sent to adjudication. Clearly something was wrong during the ES&S tabulation machine scanning of these mail-in/absentee ballots to cause so many of them to be deemed unable to read. Furthermore, according to Delaware’s election law, each ballot needed a Republican, a Democrat, and an election judge to view them and decide the voter’s intent. What kind of man hours would it take for elections officials to view every one of those adjudicated ballots? The mail in ballots were not supposed to be opened or counted until Election Day. How did that many ballots get processed in such a short amount of time? Did any of the officials question or raise concern for the amount of adjudications? Were the ES&S tabulation machines calibrated correctly? Were the machines certified? Who certified them? We the People of Delaware deserve to know what happened on Nov. 3, 2020. We should have complete confidence in our elections given that a FREE and FAIR election is the cornerstone of this Constitutional Republic. Our elected representatives and appointed Board of Elections, have a duty to We The People that they have not been living up to. We have questions. We want answers. We will not settle for “There’s nothing I can do” any longer. Audit Delaware.” 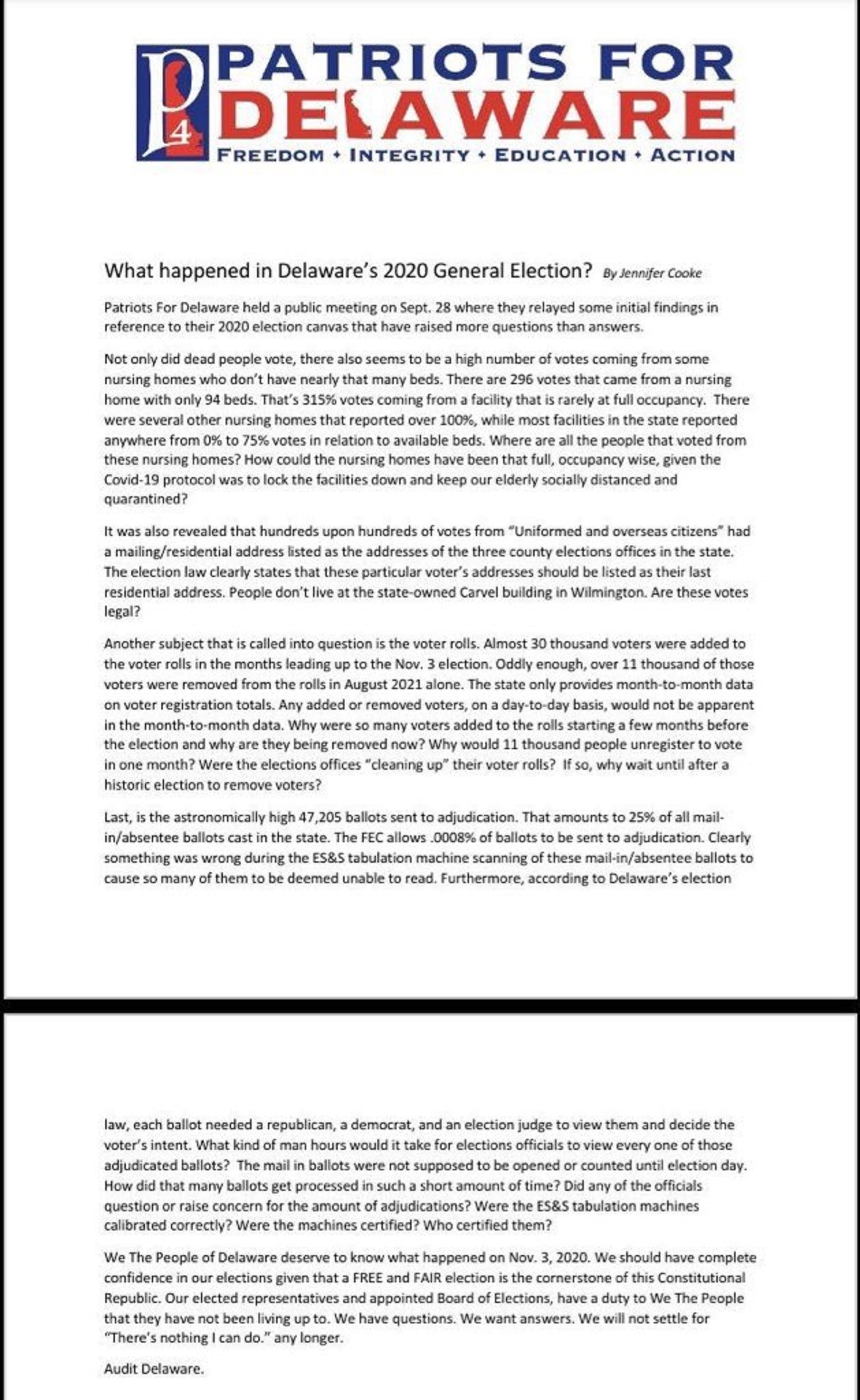