TRUMP: 'January 6 Was A Protest' And 'The Real Insurrection Took Place On November 3'

A former Mitt Romney staffer turned Congressional candidate who is backed by disgraced anti-Trump Republican Liz Cheney posted a photoshopped image of himself beside the 45th President in a seemingly desperate effort to tie his own bid for office to the extremely popular Donald Trump, who his own backers and bosses tried to remove from office.

In a recent Jim Bognet for Congress campaign ad run on social media, Bognet digitally altered images of himself and President Donald Trump, in a process colloquially referred to as photoshopping, to display himself next to the 45th President with a message that implies President Trump has offered Bognet his support.

Specifically, Bognet’s ad contains the words “I’ve heard good things, Jim” written above President Trump’s head. In the campaign ad, the phrase doesn’t even include quotation marks, seeming to indicate that the compliment from President Trump is as fake as Bognet’s doctored photograph. 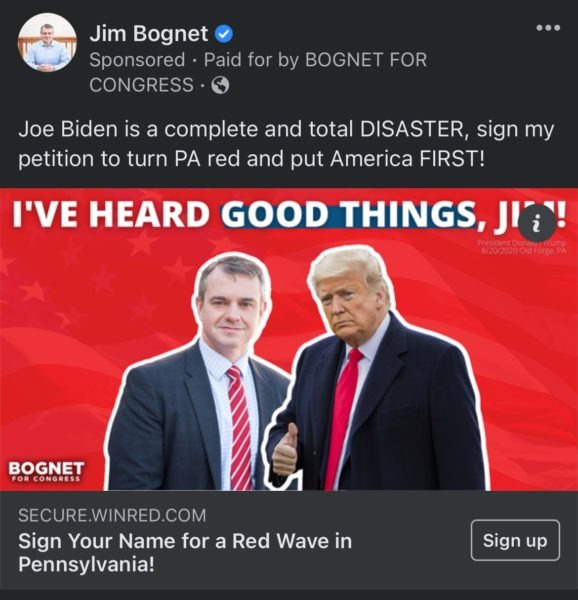 Users who click on the Bognet campaign ad are directed to the webpage of WinRed, the controversial GOP fundraising site pushed by establishment Republicans that has been accused of using deceptive tactics to fleece Republican voters.

Jim Bognet, a former staffer for noted Trump hater Mitt Romney, was the GOP’s 2020 nominee to Congress in Pennsylvania’s 8th District, but lost his bid to Democrat Matt Cartwright. Among Trump voters, Bognet was largely seen as an establishment pick meant to block 8th District conservatives from actually having a voice within the GOP.

Bognet, whose campaign is backed by disgraced establishment Republican Liz Cheney, will face America First conservative Teddy Daniels in the battle for the GOP nomination. The match-up will be a partial re-match from 2020 when Bognet, who enjoyed establishment support, narrowly won the nomination against a large field of candidates. He lost the general election to the opposing Democrat, and now is asking voters for another opportunity.

In the aftermath of the 2020 Election, the 8th District’s Trump voters have largely rallied around Daniels as opposed to Bognet. Daniels is a veteran, former police officer, and NCAA Division 1 football player, who may remind locals of the region’s blue collar spirit, especially when compared to swamp-endorsed Bognet.

While President Trump has yet to make an endorsement in the race, at this point Daniels has secured key endorsements from former Trump lawyer Jenna Ellis and from Gen. Michael Flynn.

Bognet’s close ties to anti-Trump establishment figures are not limited to Liz Cheney and Mitt Romney, despite his attempts to cast himself as a pro-Trump Republican using digitally altered images.

As previously reported by National File, when Mitt Romney’s 2008 Presidential bid collapsed, Bognet went on to work for anti-Trump GOP nominee John McCain, who also lost in the end. Even worse, in 2016, as Donald J. Trump ran a historic and ultimately successful America First campaign for President, Bognet served as Vice President of a Democrat-founded lobbying firm, the Glover Park Group.

In Pennsylvania, anti-Trump Wyoming Rep. Liz Cheney’s support of Bognet has drawn the ire of conservatives, who see him as an establishment prop meant to stop America First conservative Teddy Daniels from achieving the GOP nomination. A veterans groups, by the name of Bring Our Troops Home, has blasted Bognet’s affiliation with who they refer to as “Chicken Hawk Cheney,” a play on her father’s reputation as a “war hawk” who has never seen military service, demanding Bognet and other Cheney-backed Republicans renounce her support. Even her own state’s GOP has turned on Liz Cheney, voting to no longer recognize her as a Republican over her close work with the radical left and uni-party political establishment.

TRUMP: 'January 6 Was A Protest' And 'The Real Insurrection Took Place On November 3'

President Trump has said that the events on January 6 at Capitol Hill was just a protest, and that the real insurrection took place on election day
By Jack Hadfield  December 2, 2021 Comment MoreShare

Press Secretary Jen Psaki was pressed by Peter Doocy of Fox News regarding a string of organized retail thefts, most notably affecting the San Francisco Bay Area. “When a huge […]

Mayor Bill DeBlasio was present for the opening of the nation’s first “safe injection sites” in New York City on Tuesday. People are free to use any and all illegal […]

A fully vaccinated Colorado woman who recently traveled to South Africa has been diagnosed with the omicron variant of COVID-19, adding to the growing list of vaccinated individuals who have […]

Mark Meadows is cooperating with the partisan 1/6 Commission as questions about his role with the Humpty Dumpty Institute emerge.
By Andrew White  December 2, 2021 Comment MoreShare