South Dakota governor Kristi Noem has successfully killed House Bill 1217, which would have prevented biological males from competing in women’s sports, with her “not a veto” veto on Monday. The South Dakota House of Representatives fell two votes short of the 47 needed for a successful veto override, making the legislation dead on arrival.

“Fairness in Women’s Sports bill fails in the SD House,” State Rep. Fred Deutsch (R) announced on Monday. “Needed 47 votes to override the governors veto. We got 45. We’ll come back next year and try again.” 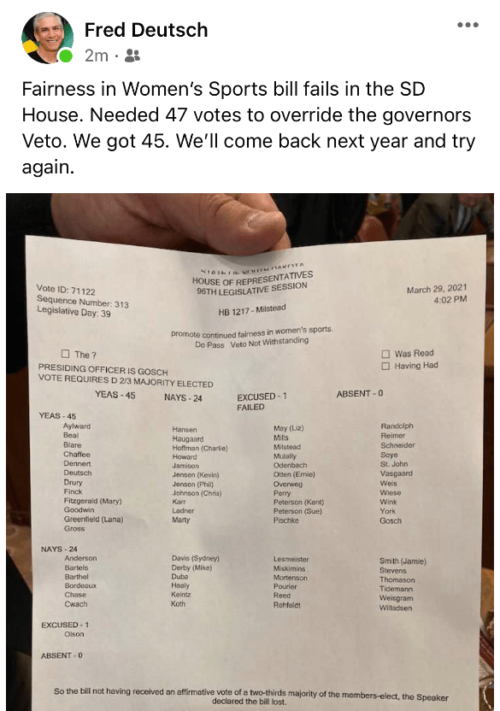 Noem has under scrutiny for her comments during an interview on the ‘Tucker Carlson Tonight” television show and elsewhere, including “I’ve been bullied by the left for years. Now, there’s bullies on the right, too.”

As National File reported earlier on Monday, Noem rejected HB 1217 through a loophole that allows the governor to block legislation in a manner identical to veto, without referring to as a veto:

Governor Kristi Noem of South Dakota followed through on her promise to block a bill that would have prevented biological males from competing in sports intended for females on Monday, insisting that her action is “not a veto” even though it functions identically to a veto.

Noem cited a provision in the state’s Constitution that allows bills with “errors in style or form” to be returned to the State legislature, in a process that functions identically to a veto.

“Given the House action, I cannot certify that the bill conforms with my specific recommendations,” Noem wrote. “Therefore, my only option consistent with the constitution is the fail [sic] to certify the bill and return it you.”